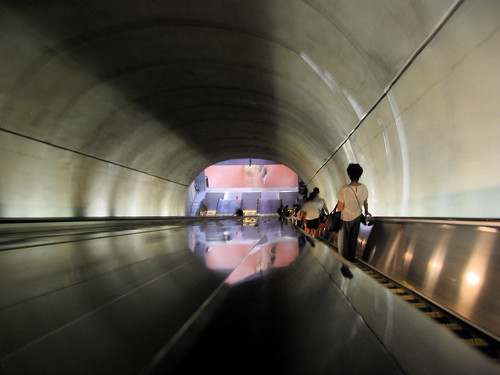 The first apartment I looked at when I moved to Boston was near Porter Square in Cambridge. I remember thinking that the escalator coming out of the bowels of the Porter T-station was the longest one I had ever ridden; I’ve believed that up until my most recent trip to Washington, DC. The escalator at the Woodley Park-Zoo Metro-station is definitely longer. I was a little farther than halfway down by the time I pulled out my camera and snapped this picture.

Last weekend I took part in a fantastic community exploration walk of Dorchester organized by Boston Cares. About 15 other people and myself met at the Codman Square Health Center with it’s Executive Director Bill Walczak, our guide, and Tiffany, a Boston Cares’ volunteer and the coordinator of the walk; the walks themselves were Tiffany’s original idea, too.

Bill was a fantastic guide with expert knowledge of Dorchester’s history, politics and residents. Originally a farming community, Dorchester was settled one month before Boston in May, 1630. Historically, Dorchester was nearly twice the size it is today; originally defined by creeks long lost and buried, today mostly arbitrarily assigned ZIP codes shape its borders.

Codman Square was once the center of Dorchester, both geographically and commercially. In a time when there were few roads, and crossings were nearly nonexistent, Codman Square was the intersection of a meeting house road, Washington Street, and an Indian trail used by the Massachusett tribe between their winter quarters near what is now Mattapan Square, and their summer lands at the beach near Commercial Point.

Dorchester was annexed by Boston in 1869 in a rigged election. At the time, Southern European and Jewish immigrants were streaming into Boston and the well-to-do wanted nothing doing with them; Dorchester was the perfect place for the rich to move to. Except there was no water. Dorchester has no large natural sources of fresh water, and well-water wouldn’t support an urban population. So, as benefit of the annexation, Dorchester received Boston’s Lake Cochituate water.

The influx of well-to-do led the building of new trolley and subway lines–previous to this transportation was by steam railroad–and large mansions and two-family homes. Of course, it wasn’t long until the immigrants spread out as well. This led to mass construction of Triple-Deckers, a Dorchester architectural invention. These three-story free-standing homes were viewed as an improvement over the brick tenement houses of other northeastern cities and were possible because of the large availability of timber in New England. Many of these homes did not survive the urban flight of the 1950s, but today they are highly desirable both as apartments–often a live-in owner will rent out the other floors to pay the mortgage (as where I live)–and increasingly as condos (though perhaps the end of the current real estate bubble will change this).

Of course, as we moved into talking about the modern period, crime and Dorchester’s bad reputation was addressed. Few people I’ve met in Boston from outside of Dorchester have anything good to say about the community; even fewer have even been there. Regional newspapers and the mass-media, when they do report on Dorchester, concentrate only on crime and murder; when there isn’t any, they report that as out of the ordinary (the Boston Metro recently ran a headline proclaiming, ‘Two weeks without a murder’). Unfortunately, this is entirely mistelling of the true nature of Dorchester

Dorchester, as our walk showed us, contains a lot of beauty and richness in its businesses, its architecture, its art and its people. Washington Street cleaves the Eastern and Western half, the former has higher property-values than the latter, in which many of the Housing Projects sit, but no less beauty. There a few tough parts, but most parts, like Codman Square, Ashmont Hill and Savin Hill are absolutely stunning. Friendly people, beautiful homes and lots of green space met us at nearly every turn.

Dorchester is one-fifth of Boston’s population and contains just as much interest and beauty as the rest; don’t be a stranger. 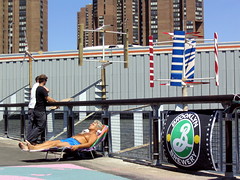 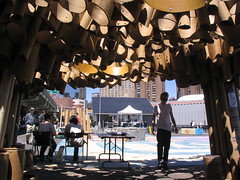 While in New York a few weekends ago I visited the Solar Powered Arts Festival at the encouragement of a local techy and all around good guy Jacob. He and the ever smiling Diana met me at Stuyvesant Cove Park on Sunday afternoon, both of them having used pedal power to get up there from Brooklyn; I took the metro. There was a lot of really cool artisans and builders out. From the friendly woman who paints bicycle portraits to the kooky guy setting alight aluminum and lye (the combination creates hydrogen gas) and giving away plans for sterling engines. A stage was powered entirely by solar panels where local musicians were jamming. Also, the Children’s Zoo had a couple of snakes and monarch butterflies out for people to touch and their keepers, of course, who you couldn’t. I had a good time photographing the two “structures” the organizers had built: the first built out of cardboard tubing, the other a pile of tires. The tubing was a mish mash of concrete-piling-forms connected together with “a couple thousand bolts”; this from the guy further reinforcing it further with nails pounded in by the side of his wrench “to fill time”. It was throwing some crazy shadows. The tires were just a bunch of tires piled up with plants in them; it was a nice juxtaposition of green and black. 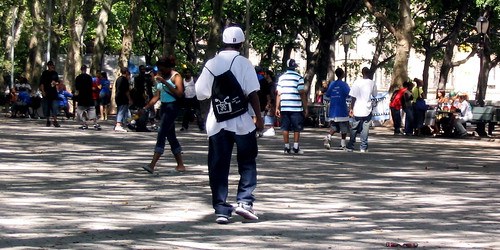 After my long walk on Saturday I ended up in Harlem for a Youth Channel blockparty hosted by Manhattan Neighborhood Network (MNN), one of the largest (if not the largest) public access stations in the country. Youth Channel provides disadvantaged, low-income and minority youth with access to a quality media forum through which to express creativity, foster dialogue, and to encourage social and political participation. At the blockparty there were lots of food, music, fun and of course, cameras. 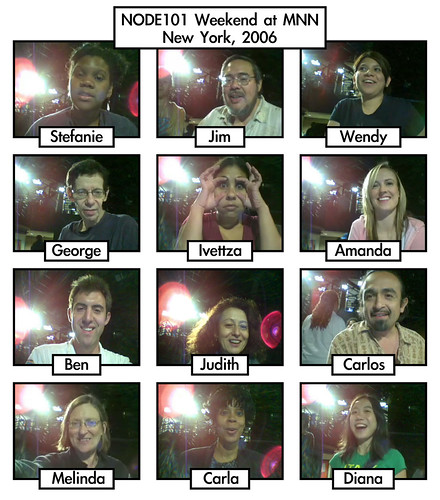 video link | fullsize image I go down to New York City to see my friend’s new apartment, and somehow get roped into teaching people how to videoblog. What a crazy weekend. Manhattan Neighborhood Network (MNN) hosted a videoblogging meet-and-greet in their studio on Saturday night as part of Node101 Weekend. There were lots of food, people and of course cameras. Many attendees were cable access producers who had never vlogged before. I showed them how easy it was to shoot, edit, compress and upload. Click on the tableau above, or here to see what people were posting.

I spent the weekend in New York City. Saturday, having a free afternoon, I walked from 59th Street all the way up to 148th Street in Harlem. It took about four hours, but was a beautiful day and an awesome walk.

Community technology is great. It is incredibly refreshing to be reminded on a daily basis that, as a developer and technologist, I don’t know crap about how everyday people view and use technology. Two weeks ago I was in Washington, DC for the CTCnet Conference. While there I helped John Lorance of CompuMentor give a presentation on how Community Technology Centers and nonprofit orgaizations can use “Web 2.0” services and tools like Flickr, del.icio.us, wikis, mapping, et cetera, to improve their programs and better fulfill their missions. At the end we opened the floor to questions and comments. An attendee stood up and said that he had always been worried that with computers and machines growing ever smarter and more powerful, one day they would overthrow mankind. But, after seeing these new Web 2.0 tools, he is relieved that humans will always stay one step ahead of the machines. Hallelujah. I made this drawing using Inkscape, an awesome open source illustration program. 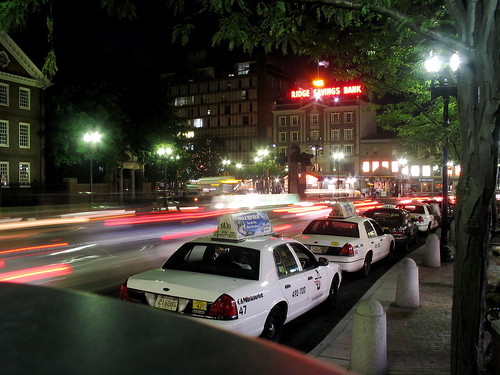 My primary digital camera broke about two weeks ago. I pull my old one out of storage; it’s clunky as all heck, but the old camera has a lot more manual settings than my sleek, sexy and recently broken one did. To make lemonade out of a bitter situation, I’ve been taking a lot of more night scenes and abnormal exposures because, well, I can. 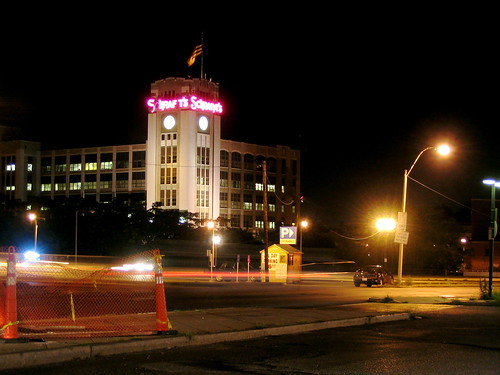 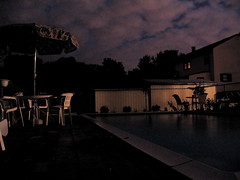 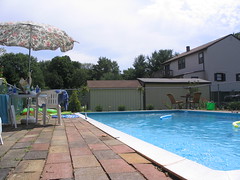 I spent the weekend in the Connecticut suburbs with some friends, camping out in their parent’s backyard and playing Marco Polo at midnight. The tent we had was huge; we were only five but it easily could have fit 10. The ground was surprisingly flat and the grass soft; it wasn’t a spectacular night’s sleep, but I’ve definitely had worse. 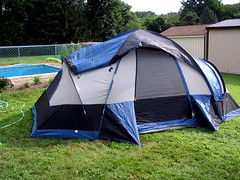 Future fellow VISTA Leader Danielle and I were all about Boston yesterday: Josh Ritter rocked in Copley Square and Wikimania kicked off in Cambridge. Photography loves company and both of us happened to take pictures of each other in the act of aiming; neither of us feel they’re very flattering. 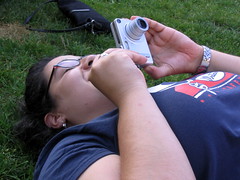 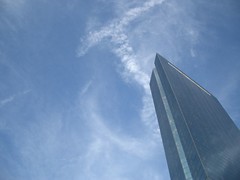 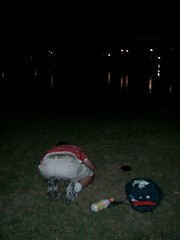 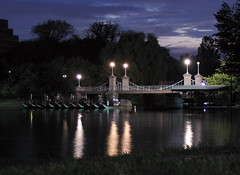