Last night was all barbeque and mapping in Somerville; Adam Holt was host. I met Adam through my Google Map hacking and work with community mapping; I just started joining his monthly meeting of maperati for more remote sensing talk than you can shake a RC30 at.

The evening’s purpose, besides eating, drinking and socializing, was to assemble a collage of local satellite photography for the upcoming Wikimania conference at Harvard Law School’s Berkman Center; attendees will mark-up the map with observations and stories. 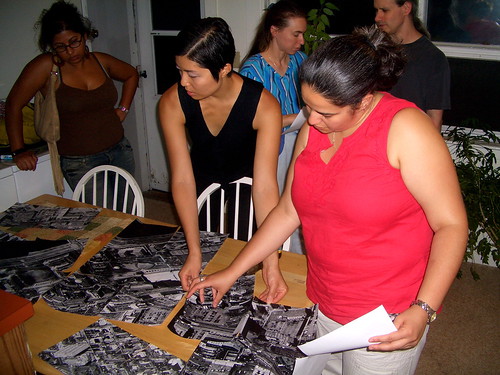 Matching all of the photos was a bit of a chore. Earlier in the day Adam had a friend print off about 50 sheets using Microsoft’s Live Local. These black and white prints were cut down to about 10”x10” and somewhere in the process got horribly mixed up. All the photos were obliques (thanks Lisa!), and there were a couple different scales and angles that we had to match up as best as possible. I was pretty surprised with my pattern recognition skills; all that time spent pulling aerial photos in my college library really paid off.

We got the pieces together by the end of the night and the resulting scene pretty impressive. I always like the birds-eye view. 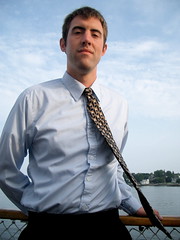 My friend Danielle took this ridiculous photo of me aboard the Thomas Leighton (known locally as the “Tippy Tommy”) operating out of Portsmouth, New Hampshire. We were at the wedding of a friend taking place on the Piscataqua River, the third fastest-flowing navigable river in the world.

I feel I look very political-worthy in this picture; all I need is to airbrush the tie into an American flag.

The heatwave in Boston finally broke yesterday bringing some much needed coolness to the city. As soon as I got home from work, I hopped on my bike and took a nice relaxing ride. In Jamaica Plain, where I live, there is a long bike and walking path that follows the Orange Line subway nearly into Downtown Boston. The path runs from Forest Hills all the way to Back Bay Station near Copley Plaza.

I strapped the camera to my bike using some velcro cable ties and a sock for shock absorption.

I was out walking in Lowell today; as I crossed the awful intersection of Central, Prescot and Market Streets, I heard a strange ringing, like an old fashioned fire alarm. Looking around, I realized that it was coming from the Walk/Don’t Walk sign. This is the first time I’ve ever heard anything other than the chirp sounds from the pedestrian signals. 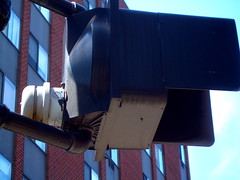 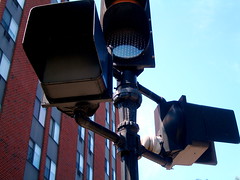 Of course, Lowell is known for innovation. Agent Orange was invented here. Coincidentally, this also occurred at near the same time as a massive die-off of old-growth trees in the Merrimack Valley. It’s amazing the things you learn talking to old people.

Boston is still scorching and nothing is better than some ground up fruit and ice. Sure, the storebought strawberries out here on the East coast are about as flavorful as a glass of water, but they add nice color. This is strawberry-peach-orange I believe.

Monday was Saul and my’s first Monday Night Write (MNW); a time to get together, eat, talk, laugh, wander around, talk some more and finally, eventually, work on our writing. We met at Saul’s house, where he first treated me to a delicious salad and some refreshing lemonade. Then we were off to the 1369 Coffee House to write and practice another key authorial skill: not paying for anything. 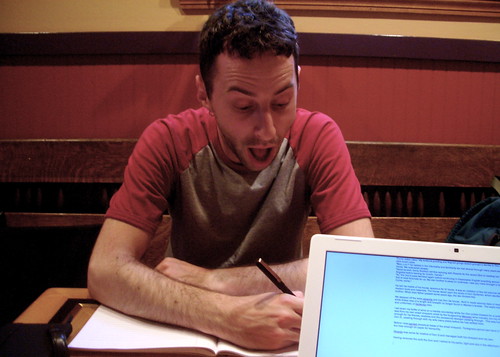 Perhaps the longest novel in the English language is The Story of the Vivian Girls written by Harvey Darger; it runs to 15,143 pages. Also, the letters MNW, if rotated upside down, spell MNW.

This morning a coworker placed an article from the July 2006 edition of Communications Engineering and Design Magazine entitled “Net neutrality legislation–my take on it” by Jeffrey Krauss, President of Telecommunications and Technology Policy.

Net Neutrality is an important issue; pending legislation and changing business practices have the potential to dramatically change how we use the Internet. Below I have responded to some of the points Mr. Krauss brought up in the article.

“There’s an enormous coalition supporting net neutrality, hundreds of individuals and organizations and companies that I have never heard of. But if you follow the money, you find that it’s really Google, Amazon.com, eBay and Yahoo! that are behind this campaign.”

Yes, there is wide support for Net Neutrality and for good reason. I run several small websites (and am known to browse the web myself), and am happy that Google, Amazon.com, et al are behind the campaign and helping to pay for it. I don’t have the money or resources to fight for Net Neutrality as well as they can, so I’m really glad that they are.

A Canadian Telco has blocked access. AT&T’s CEO is threatening to do so .

“What? You say that your voice telephone service, which uses the PacketCable specifications designed by CableLabs, gives better quality of service control than the versions offered by Skype or Vonage? That’s prohibited. Too bad!”

Exactly. As a paying customer I should be able to use whatever service I want as long as it is not malicious to the network itself. There is a big difference between “malicious” and merely “inefficient”.

The main issue is the structural difference between content or services (Amazon, Google, Skype, P2P), and distribution (ISPs and bandwidth). This is not entirely cut and dry because Telcos are ISPs and offer services (Comcast VOIP), and Google may soon become an ISP, but the concept that the content or services themselves, and their distribution should be seperate is at the heart of the Net Neutrality debate.

“But they don’t give you the right to use network intelligence to block spam, or to identify and control peer-to-peer traffic.”

What is wrong with peer-to-peer traffic? The issue should be the content itself, if it’s copyrighted material, not the manner in which it’s distributed (P2P as opposed to Server-Client), and there are many legal uses of P2P (such as noncommecial media and Open Source Software distribution). Like I said earlier, as a customer, I pay for bandwidth (as does Google, et al), and I believe I should have the right to use that bandwidth in any fashion I choose, as long as it is not malicious to the network. If the issue is that the ISP has oversold their bandwidth with the assumption that I *wouldn’t* use it, then that is the ISP’s failure–and one that proper market forces will take care of.

“There are already commercial mechanisms that allow Web vendors to achieve improved quality of service, but these bills would prohibit ISPs from offering such services.”

There are commercial mechanisms, like the Akamai example given in the text, that Amazon and other web vendors use to increase network speed and efficiency. But these occur upstream of ISPs; an ISP could then QoS out any benefit from using Akamai on the ISP’s network. Without Net Neutrality legislation, in order for Amazon to offer a guaranteed user experience, they would have to contract with the ISP of every single customer Amazon wishes to do business with. This would actually drive services like Akamai out of business! And if I don’t have the money or resources to negotiate with ISPs, then I’m locked out; a little guy.

“Nothing in these bills protects ISPs from powerful content owners imposing their priorities unilaterally.”

Why would these bills include that? That isn’t even technologically possible. Google itself has no power over me if I choose instead to use Yahoo (or any competing search engine, large or small) in my web browser. Unfortunately, my ISP *does* have the power to unilaterally affect what search engine I use, and Net Neutrality legislation hopes to make it illegal for my ISP to brandish that power. Google and Yahoo provide content, ISPs should distribute that content without regard to who it is coming from.

“If new technology or new services were to be deployed that allow competitors to leapfrog their dominant market position, that’s bad for them. The goal of this legislation is to make sure that doesn’t happen.”

Completely false. The concept of Net Neutrality is that any content or service can compete on equal footing without the express consent (or money changing hands) of the distributors. In fact, this statement is directly applicable to the ISPs desires, *not* the services. In the earlier example of the VOIP service, ISPs want to slow or block deployment of Skype or Vonage because they *do* in fact “compete” with services offered natively by ISPs.

Companies like Amazon, Google and Yahoo are owed their enormous growth and success because they have offered superior services that have competed fairly without ISPs meddling. These companies continue to innovate because they currently *do not* lock out (or slow down) competitors (both current and emerging) by contracting with ISPs for special status or enhanced benefits; Net Neutrality legislation seeks to codify this. Google was once a small business that succeeded through innovation; without Net Neutrality, other innovative small businesses will not have the chance to share in similar success. 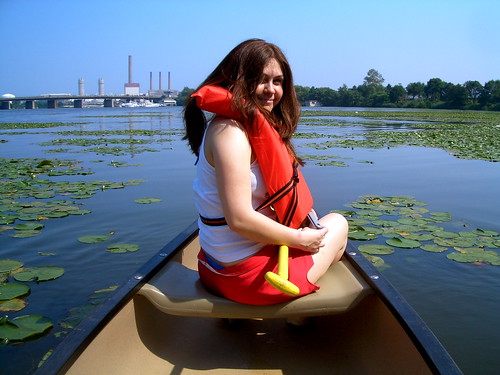 Today was a beautiful, bright and sunny Sunday and my friends Dandy, Danielle, Saul and I headed down to the Mystic River for some canoeing. It was great fun; we only ran into overhanging branches, rocks, bridges, the banks and each other a couple times.

The Mystic River not only has a movie named after it, but comes from the Native American word “Missi-Tuk”, which translates to “great tidal river.” The river has a long history of pollution from surrounding factories and chemical plants. Two Superfund sites sit within the river’s watershed: Wells G & H and Industriplex . 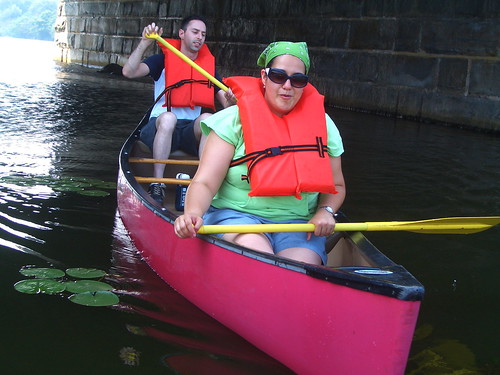 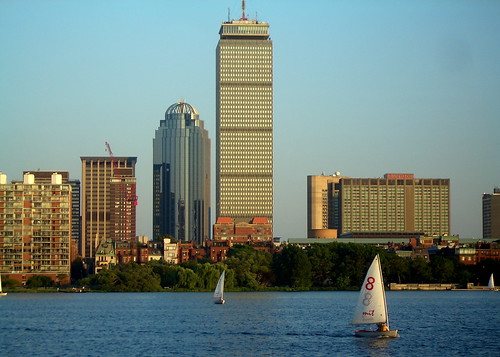 Running fast, flat out, is the best feeling on earth.

When I run my legs are big pistons driving my feet against the ground. My heart sticks up into my throat and beats against my chest. My face drips sweat and my nose burns. Sometimes I think if could get just a little more speed, lift myself just a little higher off the ground, I’d up and fly. I know it.

All the other kids bring their bikes out to Richards Field. It’s not that I don’t have one, I do. I’d rather run. Last summer Nate learned from his brother how to put a baseball card in the wheel. Now everyone’s done it. You tie it right across the fork and it sort’ve pops till you’re going fast. Then it hums, like you’re riding a motorcycle.

The field is two blocks over from my house. It’s a real airfield, or at least it used to be, back before there were jets and all. Just one big flat grassy field where planes would land. No control tower or even a radio. There wasn’t so many planes back then, so nobody must have minded much.

There’s even a pole for where the windsock used to be. It’s lying right out in the middle of the field, split in two. If you roll it just right, there’s all kinds of bugs and worms underneath. But that’s Richards field, all bugs and grass and hitchhikers that stick into your socks and hair. They’ll itch if they don’t hurt. Spiders too.

You can find things in Richard’s Field. Old rusted bolts and bits of metal. Nothing big, just little things from the planes. Maybe a lock-nut, or a retaining screw, or some of piece of bailing wire. I’ll pick them up sometimes and wonder where they’ve been.

When I’m running out in Richards Field and no one is around, sometimes I’ll start humming, real loud-like. Maybe it’s not that I’m running too slow, maybe it’s the sound. Maybe that’s why I’m not flying. Sure, I’ve got plenty of baseball cards. I do. But when I’m running, there is nothing to attach them to.