My pet project, MeetAmeriCorps.com has finally passed that development milestone that marks a “social network”: Buddylists. To be a little more haute, we’ve decided to call them “contact lists”, but the concept is the same: you can demarcate people who you like/know/want-to-be-on-your-contact-list.

Since I haven’t really been advertising it too heavily, Meet AmeriCorps was a directory–now it’s a “social network”–of AmeriCorps and AmeriCorps*VISTA volunteers who are either currently serving or alumni. It’s pretty neat stuff, doesn’t look to shabby and, disclosing I am the lead developer on the project, actually kind’ve useful.

We put together MeetAmeriCorps.com to fill what I see as a sorely lacking need. AmeriCorps and VISTA are essentially-governmental, national-service programs that mostly places full-time, stipended volunteers with community organizations. AmeriCorps speaks of itself as a “network” that is creating a “national service movement”. Unfortunately, it doesn’t have the capacity to truly achieve this because, in my opinion and experience, AmeriCorps and VISTA members generally do not:

AmeriCorps and VISTA currently provide some tools and resources to achieve #3, but I believe that #3 cannot be achieved with volunteers being able to effectively communicate and identify themselves as AmeriCorps both to each other and the outside world.

Meet AmeriCorps seeks to provide an easy-to-use tool for AmeriCorps members to meaningfully interact with one another both within service, and outside of it. I hope this will improve the experience of being an AmeriCorps or VISTA volunteer and contribute towards creating a true network and movement.

These screenshots were made with the OSX app Paparazzi! 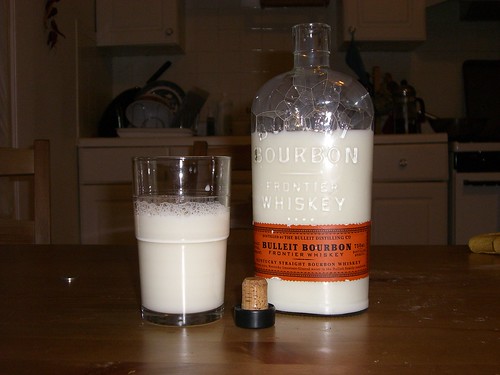 Our milk carton sprung a leak and these were the best containers on hand. I drink my milk from a dirty glass. 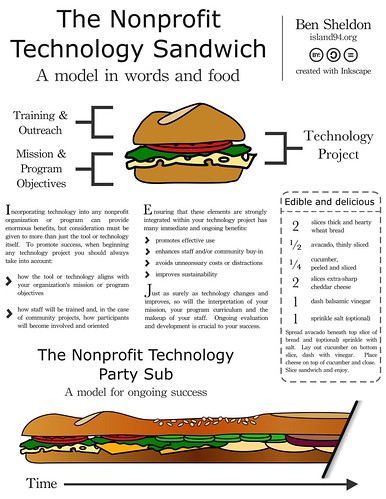 I don’t know if it’s my empathy for the myriad of people I know stymied in technology quagmires for good causes or a desire to combine my love of good food with my job, but this is the result. Download a printable PDF perfect for tacking to your wall or the wall of whomever makes technology decisions at your organization. Update: The sandwich is on Unmediated.org Update: The sandwich is on LOLnptech.org 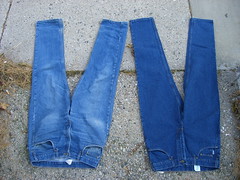 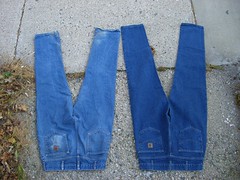 Click on the photos to see explanations of the wear marks

I purchased a new pair of jeans last weekend. In fact, I got the exact same brand (Carhart), style (relaxed-fit) and size (34-34) from the same store (Jones Department Store, “Jonesy’s” in Southie vernacular) at the same time of year (Novembrish) as I did last year. I also bought a new cap too. I don’t want it to seem like I don’t make progress in my life but the cap is identical too, to one I got last year (it matches my mittens) on the same expedition. Its progenitor was lost to the Boston Public Library one cold March morning.

Buying pants is always exciting for me; I never even owned a pair until I was 13–in San Diego one can get away with that. My mom likes to tell the story of my middle school principal saying to her after eighth grade promotion (for which I was en-panted), “I never thought I’d see the day with Ben in pants.”

In side note, it was pouring rain last Saturday when I went out to Southie to buy the jeans. Jonesies is far up on East Broadway; and while I caught the #9 bus there, I walked/swam back. 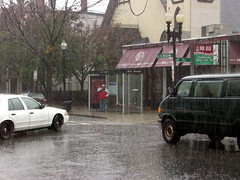 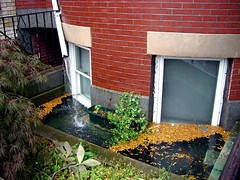 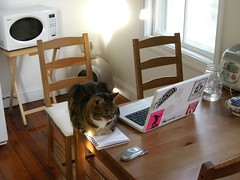 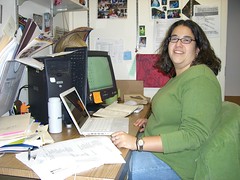 Molly is cute, furry and warm. She doesn’t take dictation though.

A hardened concrete box deep in the windowless bowels of UMass Boston. Not my desk, but respective.

Danielle is hardworking, hilarious and awesome. She doesn’t take dictation either.

One evening, not far earlier than today, I was sitting upon Boston Common enjoying the last sloping rays of the day. As was my habit, I blissfully blocked out the city around me to better enjoy the feeble warmth of a setting sun.

Sometime in this I was taken unawares by a man I did not know. His face told of a race not estranged from these shores and his eyes shone with long familiarity to the world. He sat beside me and from his mouth came a string of words I willed myself to make sense of. He told me of something most wonderful, most horrible, and from which I am forever changed.

Boston is a city of gross extremes: poverty and wealth, light and dark, high and low: the crumbling triple-deckers of Roxbury and the affluent brownstones of the South End, the Irish enclaves and the Haitian Mass, the deep tunnels of the T and the airy heights of the JHB.

Boston has not always been this way.

Long before the first explorers, the vikings, conquistadors, traders, pilgrims stepped foot on these coasts, Native Americans, the Indians, roamed what were once three hills, the Tremont, of Boston. But to one tribe, the Massachusett, to whom this stranger called his ancestors, travel was not as it seemed to us. It was something different: faster, if time had reference; shorter, if distance had meaning; darker, but only to an unenlightened mind.

The Massachusett people were aware of certain trails that could connect a physical place with any another, directly and absolute. No, not trails: one trail that subsumed all forks; a true path: a Way. On this Way their people traveled and obtained a unity never equaled. But to speak of this in physical terms is a misdirection, a lie. The Way was the manifestation of an entire culture connected: an ethos, born and endured for eons; willed into the physical by a shared understanding: a Truth sustained.

Such a Way gave evidence upon the earth, in footprints and matted brush; to hide them would have been schizophrenic, a denial of reality. Until the foreigners and their foreign minds arrived.

There was once a Fork, a Path, an infinite fraction of the Way, that led between the Massachusett’s wintering grounds where now is Mattapan, and their summer rest at what we call Columbia Point. To traverse these locations was an instant to them, but a half-day’s journey to these new, strange colonists. A misunderstanding between such fundamentally different peoples led to a mistake, a tragedy that could never be repeated:

The Fork was crossed, pinned down, substantiated by the traversal of a different form: a Meeting House Road to which the laws, our laws, of space and time and distance obeyed. A market, Codman Square, was thrown up around an impossible unity, an unimaginable contract. Those that understood watched and learned and forevermore hid the Way.

But to hide such a thing as the Way was not simple. It was a culture, and to modify that was to modify a people, their world view, their psyche. To hold Truth in darkness became a mad and impossible task. The Way still appeared sometimes in form; in meandering cowpaths and stream beds; in trickery, jest, and passion to the foreigners who traveled them, improved them, paved and finished them. Concrete and asphalt roads and highways that never run straight, that never take travelers to their destination, that wind and meander in blessed lunacy. This was what was left of the Way. Almost.

Boston is a city of tunnels: the mundane of Copley Place and the scandalous of Old City Hall. The T cuts deep through Boston’s heart, but one Tunnel digs still deeper. As understanding of the Way receded from their people’s culture, deeper and farther out of sight did its Paths move physically; below prying eyes and beyond divergent minds.

Waiting and weakening below Boston’s blossoming new streets and conduits, the Way sat unused. Its owners and sustainers diminished and integrated, losing what they had once known in fullness.

For so long, this stranger said, he had been the last to hold this Secret, this Truth, dim and alive for this world. But, he said, that is no longer. It is yours now.

Somehow this, among all else, shocked me. I startled to my feet. Stumbling, running, falling, I struck the ground. Turning back I looked but he was gone. The grass, the light, gone. Only dirt, dark, moist and broken remained.

Even now I do not know what happened. Was it guilt for granting me his people’s last covenant? Mad awareness? What new direction has It taken?

I fear It waits for me. Storm drains groan as I pass and asphalt cracks spider and deepen in the streets. In the subway I see doors that never open and trains that never stop. The harbor churns; bubbles, enormous, burst from the deep.

I do not know if It stalks me out of malice or loneliness. I feel and try to empathize: I am aware of It but do not yet understand Its Paths, Its Corridors, Its Entrances.

I cannot travel the Way alone. So I share It with you. 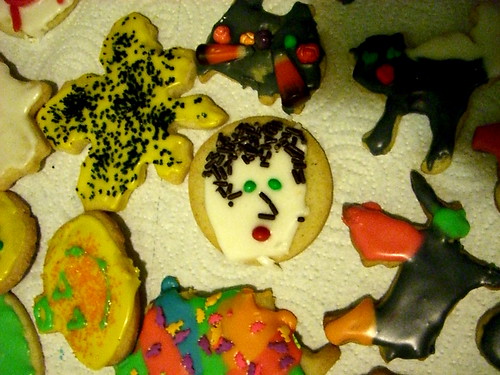 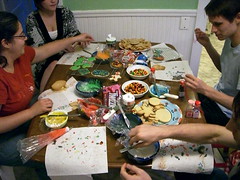 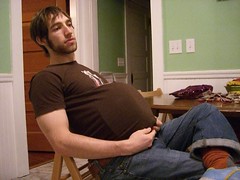 Yesterday a subset of the gang skipped the blustery weather to bake and decorate Halloween cookies in Danielle’s inviting kitchen. Other than the predictable headache and infirmity from massive sugar intake, we had good times. 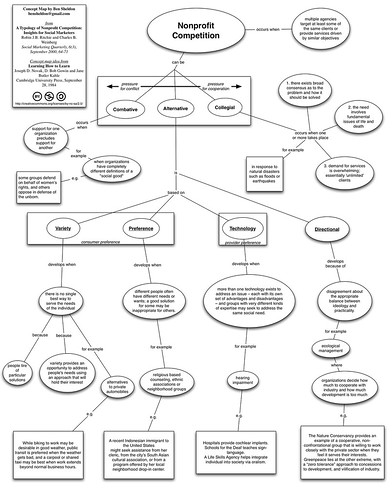 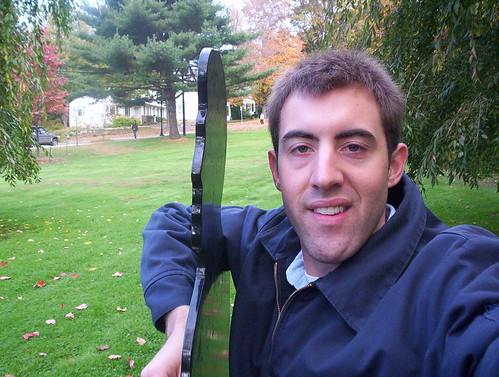 Robert Frost and me 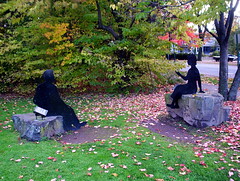 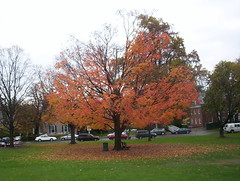 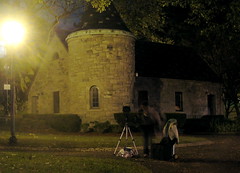 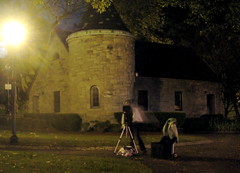