I was really happy with the feedback I received from my last article”Should I get a nonprofit job?” The responses I got, some of which you can read in the comments, helped me focus the message I was trying to convey:

A nonprofit job is not the only way to make a living and make a difference in the world.

In the comments, I think I hit upon the real issue, which is the lack of Civic Literacy I see among people in my age/social group. I don’t mean “young people are lazy/apathetic/ungrateful/whatever”, but that we don’t know how to effectively participate and initiate change in our communities and society—for no lack of interest. We’re having to make things up as we go along, which as I think my parent’s generation would agree, didn’t work out quite the way they thought it would.

So below are three suggestions I have for the intelligent, well-educated (or seeking to be), self-motivated and upwardly mobile individual who can be an ally of the nonprofit sector, but not necessarily employed by it.

Executive Boards are the driving force behind nonprofit organizations. Boards set broad goals and provide important oversight for the functioning of the organization. Many boards have term-limits for serving, which means they need a constant influx of knowledgeable and engaged individuals. Boards often run by the Three-G’s—Give, Get or Get out—but an active board will provide great opportunities for involvement beyond fundraising.

You can turn the typical fundraising experience on it’s head by offering a Request for Proposals, and get a tax write-off as well. Starting a Foundation allows you control social priorities by controlling the purse-strings. Because you’re offering a grant and not an individual gift, you have a better opportunity to target specific programs or objectives with increased accountability and oversight. Did someone say “site visit”?

There was once a time in America when people believed it was the federal government’s responsibility to offer many of the services that the nonprofit sector now provides. Regardless of your political-philosophical position, the government still provides massive amounts of funding to social causes. Contact your local, state or national representative and request support for your particular cause. You might not be able to target a particular organization for earmarks, but a rising tide raises all the boats.

I got an email from my mom this morning that the wildfires in Southern California county were strongly encroaching on my hometown of Poway and the surrounding communities. A couple of my friends started an email list and we’ve been sending around information about what’s happening.

My heart goes out to everyone that’s lost something or is worried they may. I hear that both Tabitha’s and Liz’s dad’s, school bus driver and reserve sheriff, respectively, are helping to evacuate people and I’m grateful to them.

For news I’ve been following the local Public Radio Station KPBS which is doing an awesome job of keeping up with news and updates.

Pictures and info (thanks Tabitha!)

Another map (thanks Nicole!)

(all times are Pacific)

8:30am - Tabitha reported that Rancho Bernardo and Espola Road in Poway have been evacuated. They’re taking people to the community center off of Poway Rd, and they evacuated West View HS as another safe haven.

9:30am - Corinne thinks her families home in Lake Hodges has been lost and Liz reports that someone’s house in the same area has been burned.

10:30am - Kara’s family in North Poway was evacuated at 5am that morning “Just as he was leaving the power went out and he said he could see flames on one of the ridges in the area (not sure which)”. This was the same time that Corinne says her folks were evacuated too.

10:30pm - Nicole reports that it “sounds like the Poway Community center is overflowing - my grandpa’s assisted living facility tried to evacuate their senior citizens there, but couldn’t.” On the South-East side of Pomerado mountain nicole says “It’s nothing like four years ago. No dark black clouds. We’re all hoping it will not get worse. No helicopter noise, no fire engine sirens… “

She also includes some pictures: 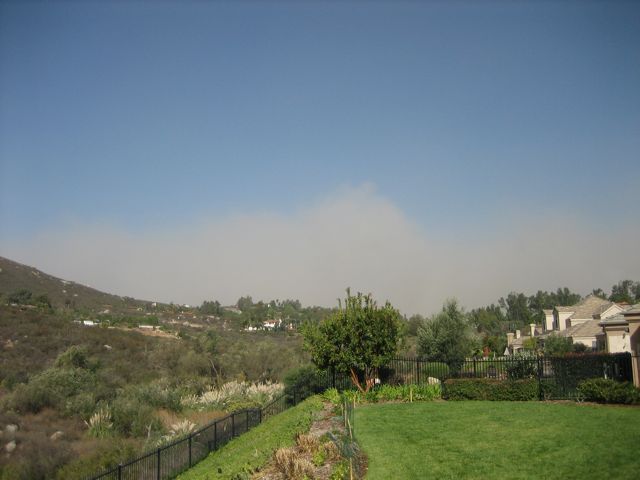 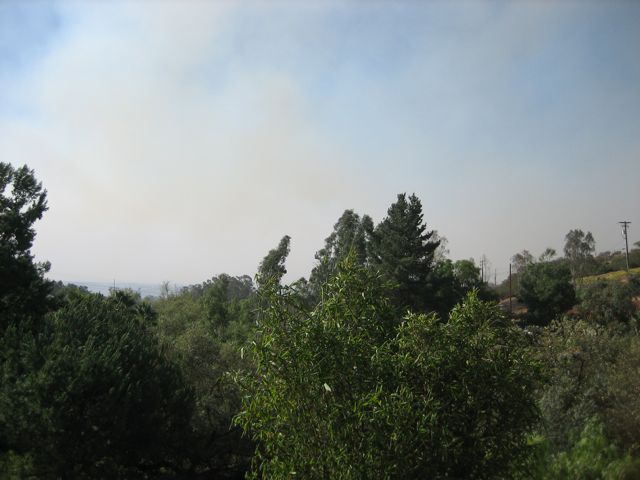 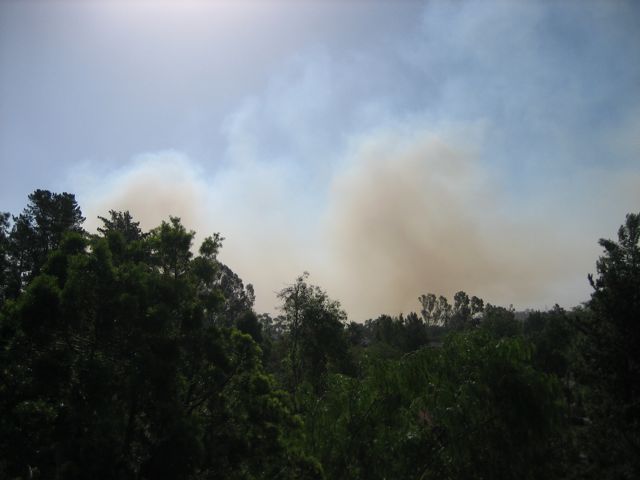 12:00noon - Nicole says “Oye… I think we are evacuating now. things seem to be getting a bit worse, but then again it’s hard to tell.”

1:00pm - Nicole again: “the dogs, my mom, and I are camped out at my dad’s work in poway’s industrial park. Saw some flames on the Poway grade as we drove over.North Poway is a bit worry some, but looks like south of Twin Peaks is okay.”

2:00pm - Tabitha reports that her mom was evacuated an hour ago.

3:00pm - Liz reports “parts of Bridlewood were on fire so it’s really not looking good for my neck of the woods. I hope Old Coach is better”

4:30pm - David says that he’s been putting out hot spots all afternoon near his house at the end of Twin Peaks (right beneath the Poway Grade, beneath Tooth Mountain).

5:00pm - Kara says that her parent’s house is gone (along with some neighbors): “When I talked to my mom, she said: ‘Well, this solves our problem of selling the house! We can build something smaller and better.’”

5:00pm - Adam reports that his parents are staying in a hotel in National City. He also says the international news leaves something to be desired (he’s in Australia right now): “CNN won’t shut up about Olivia Newton John’s home being evacuated, more or less ignoring the 250,000 evacuees in San Diego.”

6:00pm - Jason reports that a couple houses along Country Day has burned and is worried about Aaron’s house.

7:00pm - Mandy says that her parents in Upper Windmill have evacuated to Mira Mesa, but that her dad checked a few hours ago and the house is still accessible.

8:00pm - Kara sends some pictures she found on signonsandiego.com. “The first one is of the front door (or what was the front door I guess) and the second is from where the office was (you can see the pool….I think the patio furniture is ok! :)” 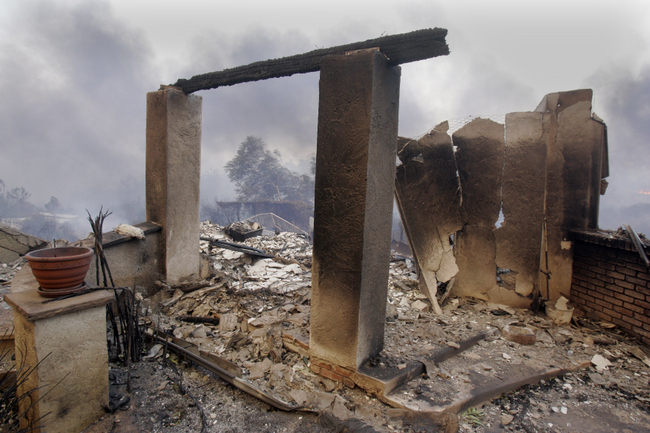 Heard this quote I liked from NAMAC keynote speaker Gary Chapman of the LBJ School of Public Affairs. He was paraphrasing John Gardner:

The nation is filled with opportunities disguised as insoluble problems.

I happen to be particularly fond of Puddingstone, the conglomerate rock found around Boston. It’s also the official rock of Massachusetts; specifically Roxbury Puddingstone.

It’s a nifty looking rock, or rather a collection of different rocks within a sedimentary rock.

It also has some fantastical elements:

Oliver Wendell Holmes wrote a poem entitled The Dorchester Giant that describes Boston’s puddingstone being the result of the abandoned children of a giant flinging plum pudding about:

What are those lone ones doing now,

The wife and the children sad?

Oh, they are in a terrible rout,

Screaming, and throwing their pudding about,

Acting as they were mad.

They flung it over to Roxbury hills,

They flung it over the plain,

And all over Milton and Dorchester too

They tumbled as thick as rain.

Puddingstone is also to be imbued with magical and protective powers. Herfordshire Puddingstone was used to cover the top of witch’s coffin to prevent her to escape in death.

There was a giant in time of old,

A mighty one was he;

He had a wife, but she was a scold,

So he kept her shut in his mammoth fold;

And he had children three.

It happened to be an election day,

And the giants were choosing a king;

The people were not democrats then,

They did not talk of the rights of men,

And all that sort of thing.

Then the giant took his children three,

And fastened them in the pen;

The children roared; quoth the giant, “Be still!”

And Dorchester Heights and Milton Hill

Rolled back the sound again.

Then he brought them a pudding stuffed with plums,

As big as the State-House dome;

Quoth he, “There’s something for you to eat;

So stop your mouths with your ‘lection treat,

And wait till your dad comes home.”

So the giant pulled him a chestnut stout,

And whittled the boughs away;

The boys and their mother set up a shout.

Bellow as loud as you may.”

Off he went, and he growled a tune

As he strode the fields along

‘Tis said a buffalo fainted away,

And fell as cold as a lump of clay,

When he heard the giant’s song.

But whether the story’s true or not,

It isn’t for me to show;

There’s many a thing that’s twice as queer

In somebody’s lectures that we hear,

And those are true, you know.

What are those lone ones doing now,

The wife and the children sad?

Oh, they are in a terrible rout,

Screaming, and throwing their pudding about,

Acting as they were mad.

They flung it over to Roxbury hills,

They flung it over the plain,

And all over Milton and Dorchester too

They tumbled as thick as rain.

Giant and mammoth have passed away,

For ages have floated by;

The suet is hard as a marrow-bone,

And every plum is turned to a stone,

But there the puddings lie.

And if, some pleasant afternoon,

You’ll ask me out to ride,

The whole of the story I will tell,

And you shall see where the puddings fell,

And pay for the punch beside.

On Slashdot today was an entry about Google Search if it was designed for Google. Basically redesigning the page for a higher pagerank.

Fun, but the interesting thing was a comment from the comments:

Should read: What if Google was a useless site…

…and had to design for Google?

Lets see… counter examples… how about searching Google for the word “shipping”. What do you know, UPS and Fedex are #1 and #2, and their front pages aren’t a mess of useless, Google-pleasing crap. Maybe because they are real businesses and aren’t pandering some direct ship junk or get rich quick scheme.

Makes sense, and is the basis for what I tell people who are concerned about SEO disproportionately to having a useful and relevant website: concentrate on having a good service and a useful website first.

Today I was helping a work-study student down the hall from my office on a film studies essay. Her assignment was to analyze what critics had to say on Woody Allen, specifically whether his films were comedies or dramas.

She had only read one of three critics ( Carney) but it was interesting to map out with her what her finished assignment would look like; she was (as was typical of my undergraduate experience) unsure of what the final product would look like, other than a page count (12-15). I gave her my best idea I could of what I would expect:

Coming up with a thesis, even as simple as “Many critics disagree as to whether Woody Allen’s films are comedic or dramatic.”

Then deconstruct and explain those elements in a logical fashion:

I thought it was interesting how that one critic strongly seems to use fantasy (I only scanned the first few pages) to define a comedy. And that Woody Allen is masterful at creating squirmy, deep situations, and ending them prematurely before any sort of conclusion can be made (the non-dramatic part).

Always interesting to see who is using Drupal for their website:

Sic transit gloria mundi Thus passes the glory of the world Noticed in The Sportswriter by Richard Ford (p. 284)

Giving the keynote at last weekend’s Craigslist Foundation’s Nonprofit Bootcamp in New York, was Nancy Lublin, CEO and Chief Old Person of Do Something and founder of Dress for Success.

She gave us her Top Ten List of things she hates about nonprofits: