I saw the movie King Corn last night at Harvard. It was ok. The best part I thought was when they interviewed Earl Butz, a Secretary of Agriculture in the 1970s that instigated a major food production policy shift.

Earl said that his change in policy led to a decrease in the amount of money people spent on food (from ~40% to 15-20%) which led to the economic prosperity of today. (eg more disposable income, more consumption, expanded economy).

Clever. Though after reading his wikipedia entry, apparently he wasn’t so clever in other respects. Definitely didn’t mention that in the movie.

One of my favorite haunts in Boston is Delux in the South End—mostly because a successive series of my friends have worked there.

One of their best dishes is the Quesadillas, which are made so in part by the fruit salsa. I’ve been working to deconstruct it, so this is what I think is in it:

After writing my last post about salsa, it made me think that grating green apple and green papaya together, along with a hint of lemon juice, would be good. Maybe sunflower seeds too, or almonds (pine nuts?)

viz. - namely, as follows, that is to say; introduces and element or list… an abbreviation for “videlicet”

vis-a-vis - (1) face to face with another (2) In relation to or compared with: Canada’s role vis-a-vis the United States in Afghanistan (3) as opposed to

From The Anorexia Scare: How Too-Thin Models May Save Your Child’s Life on EyelessWriter.com. Interesting stats that result in a somewhat ridiculous premise: “We need thin and healthy role models, and - failing that - simply thin role models” and use of fear “We need to make people more afraid of carrying around too much weight, not less.”

The author hits it on the head with diet and lifestyle, but doesn’t seem to fit that into the solution. Also like this quote: “obesity is the unhealthy side effect of successful anti-anorexia campaigns, and anorexia is the unhealthy success of anti-obesity campaigns”.

Maybe it’s just me, but any health campaign should be built on being healthy (physically, emotionally and mentally), not the polar opposite of the “bad” state—though I guess abstinence and drug education shows that people don’t think like me.

Deregulation in the utilities industry results in higher costs whenever those costs are not expected to greatly affect consumption (also in the oil industry), contrary to the consequentialist arguments of deregulation proponents. The same thing is happening in the communications sector.

From a BoingBoing comment on a broadband penetration related post. I have no clue if that’s a standard economic opinion.

Last April, the Corporation reported in its Volunteering in America study that while America’s overall volunteer rate remains at historically high levels, nearly 21 million of the over 61.2 million Americans who volunteered for nonprofit organizations in 2005 didn’t volunteer the following year. This represents an estimated annual loss to nonprofits of approximately $30 billion dollars worth of volunteer labor. From a Press Release by Sandy Scott at the Corporation for National and Community Service entitled “National Service Agency Awards Funds for Innovation In Volunteer Management” . 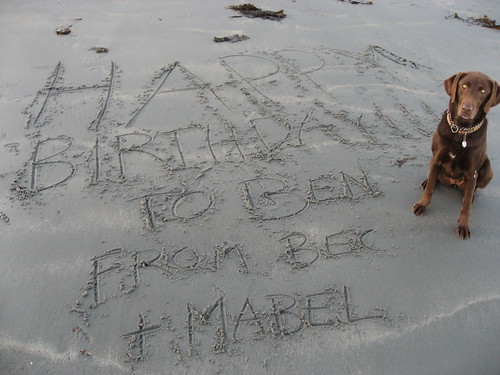 The message and photo above was taken by my friend Rebecca and features Mabel.

[Bakhtin explores] the idea that language is indeed ambiguous, but whereas deconstruction would highlight this ambiguity as the inability of words to convey precise meaning, Bakhtin welcomes this vagueness of language as a means by which to create meaning dialogically. Indeed, in describing the nature of the polyphonic novel, Bakhtin sees the entire scope of human life as a dialogic process whereby we find meaning only through our interactions with others. From a thesis entitled “What Hath Bakhtin Wrought? Toward a Unified Theory of Literature and Composition” by Lee Honeycut

One book mentioned in this conclusion is Ellen Ullman’s Close to the Machine:

(page 258, paragraph breaks and emphasis mine)

[Ullman’s life is] flexible and mobile and it demands that she build small tribes around a shared mission and link them together with information and information technologies. To the extent that Ullman tries to change the world, she does so as Buckminster Fuller might suggest she should: by designing new technologies for the management of information and the transformation of society’s resources into knowledge on which others can act.

Yet Ullman’s turn toward technologies of consciousness and toward social and economic networks has hardly brought her into the community she seeks… Cut off from… membership in permanent corporate and civic communities… her power derives primarily from what knowledge of technological systems she can carry with her and secondarily from her networks of professional friends. Her personal links to her colleagues are tenuous and brief. She is lonely. And the situation is not likely to change anytime soon.

As Ullman’s example suggests, coupling one’s life to the technologies of consciousness does not necessarily amplify one’s intellectual or emotional abilities or help one create a more whole self. On the contrary, it may require individuals to deny their own bodies, the rhythms of the life cycle, and, to the extent that their jobs require them to collaborate with far-away colleagues, even the rhythms of day and night..

It may in fact result in every bit as thorough an integration of the individual into the economic machine as the one threatened by the military-industrial-academic bureaucracy forty years earlier.

The rhetoric of peer-to-peer informationalism, however, much like the rhetoric of consciousness out of which it grew, actively obscures the material and technical infrastructure on which both the Internet and the lives of the digital generation depend. Behind the fantasy of unimpeded information flow lies the reality of millions of plastic keyboards, silicon wafers, glass-faced monitors and endless miles of cable. All of these technologies depend on manual laborers, first to build them and later to tear them apart.

This is followed by a brief description of both environmental impact and that this physical burden falls upon those who lack social and financial resources.

Like the communards of the 1960s, the techno-utopians of the 1990s denied their dependency on any but themselves. At the same time, they developed a way of thinking and talking about digital technologies from which it was almost impossible to challenge their own elite status…. Even as they conjured up visions of a disembodied, peer-to-peer utopia, and even as they suggested that such a world would in fact represent a return to a more natural, more intimate state of being, writers such as Kevin Kelly, Esther Dyson, and John Perry Barlow deprived their many readers of a language with which to think a bout the complex ways in which embodiment shapes all of human life, about the natural and social infrastructures on which that life depends, and about the effects that digital technologies and the network mode of production might have on life and its essential infrastructures.