I was pointed to Political Scientist Michael Parenti’s 7 categories of generalizations about the way the news media create anti-union messaging by this article analyzing the media’s portrayal of the Philadelphia public transit strike. I got really steamed about a month ago listening to a local interview/call-in show about Boston charter schools and the Teacher Union that revolved very strongly along these lines:

To that, I would add “Failure to recognize Union benefits/protections as an aspiration for all workers, not spoils for the few”. The interview I was listening to (and what got me steamed) kept dismissively coming back to “Why should unions demand protections from arbitrary and capricious management? No one else expects that.” Which made me keep saying back “Well why the fuck not?”

Also, just in general, I get annoyed when the union workers aren’t placed within the context of the community as a whole? What does your child’s education mean in the context of a society where their work will have no value?

Update: A comment by Jen shared in Google Reader:

I would add, the idea that worker protections encourage mediocrity because people are removed from the “competitiveness” (i.e. fear) that easy firing gives. Job security doesn’t cause lack of motivation; bad management does.

Two beautifully worded comments from Gift Hub on Wage Theft: the first because of its vulgar revelry; the second for its straightforwardness:

We know and believe because the likes of Reagan and Bush told us that if we religiously shop with the aim of indulging our most frivolous wishes, wealth will trickle down, down, down, fertilizing the subsoil, giving the healthy brown shrubs and tubers a shot at a day in the sun. Our sun.

They would have to abandon the mythology that the poor deserve it and recognize that most people would be just fine if they system were just, which it isn’t.

Fairness would be a nice start.

This lede is the baseline from which I think any discussion of contemporary journalism should begin:

There have been various proposals to “save journalism” from the crisis brought on by digitalization. But by and large these ideas have less to do with meeting the information needs of a democratic society than with preserving the profit potential of existing media outlets.

The one change I would make is to put “crisis” also in quotation marks in order to show that the crisis-metaphor is just one frame pushed by incumbent media outlets. Another frame would be “new opportunities” or “focus shift” or “changing landscape”. The above is from “ Public Media and the Decommodification of News” published in FAIR’s (Fairness and Accuracy in Reporting) Extra!

Sylvia McDaniel, executive director of Portland Community Media, which operates under the state government, said she cannot suspend a show unless lawbreaking occurs in the studio or within the context of the show.

“We manage the programs, not people’s personal lives,” McDaniel said, in a phone interview.

“We also go by their behavior in our facility,” she added. “Producing the show ‘Cannabis Common Sense’ doesn’t give them the right to stand in my parking lot and smoke dope.”

“My jurisdiction is what goes on my channels, not what someone does outside my jurisdiction,” McDaniel added. “Their personal lives are none of my business. I don’t pull a show if it has nothing to do with the show.”

I also appreciate how the article’s author contextualizes this quote from the station that pulled the show:

RVTV in general “allows free speech,” but, she said, it’s run by a public university in a small town and is “a lot more conservative in approach.”

In general, if you have to qualify speech, it isn’t free, but that’s just my opinion. 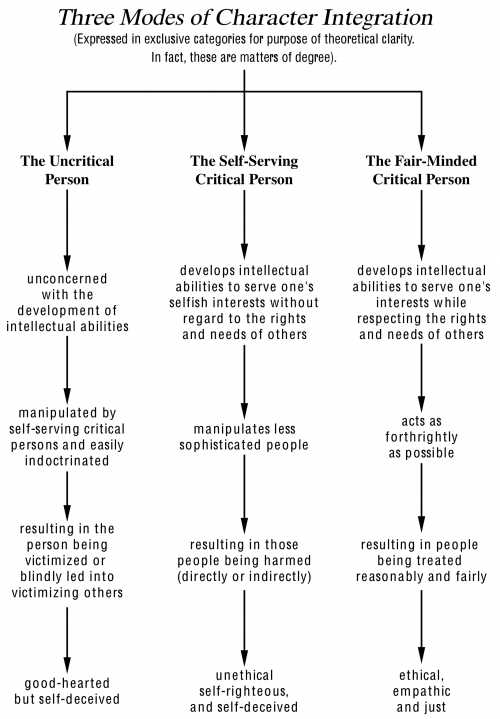 Despite it being a class on Critical Thinking I’m a little grossed out by “ethical, empathic and just” behavior being described as a deductive exercise.  But then again, I did agree with Justice Sotomayor’s “ wise-Latina” remark.

The above is  Dr. Richard Paul and Dr. Linda Elder’s Miniature Guide to Understanding the Foundations of Ethical Reasoning.

I was asked by a colleague how to increase the size of their organization’s Facebook Fan page—not that I would consider any page I manage to be an overwhelming success.

Googling around, I could only find technical advice (“install these apps”) and crappy nonexistent-advice (“You need to have a strategy.” duh, tell me what that strategy would be). So here’s the stream of consciousness around what I do:

A well-worded comment by Kia to a Gift Hub post entitled Money Has Failed in its Role of Allocating Resources towards Human Survival? (my own, typo-prone comment is lower down in the thread)—also reposted on IMproPRieTies:

We are just now witnessing the collapse of the markets. We may also see the collapse of “the markets” in another sense, the markets as a metaphor for life. Metaphors are not merely ornaments: they are very strange. For instance, the moment you take for granted that a metaphor is the equivalent of the thing it describes or points to, is the moment when that metaphor is effectively dead. It’s worse than useless for thinking with. But usually people go on using such metaphors long after they’ve ceased to generate any new ideas–which is one of the things a metaphor is supposed to help us do. People will just keep walking on in the resulting conceptual daze, because to think about it is like looking at the end of the world. Some will invest heavily in re-animating the corpse and blame the demise on the usual suspects: the all-powerful and infinitely devious upstart poor and other outsiders. I mean, maybe the market was never supposed to become the dominant metaphor of the content of human livelihood; maybe that’s why it fails.

To add to metaphor, the moment you take a framework (or logic model, or even a well-worded description) as the entirety of your endeavor, you’re toast. I’ve been in planning classes where the student decries “My project doesn’t fit!” to which the teacher replies “It should”—without clarifying whether it is the proposal or the endeavor itself that must acquiesce to the confines of little numbered boxes. 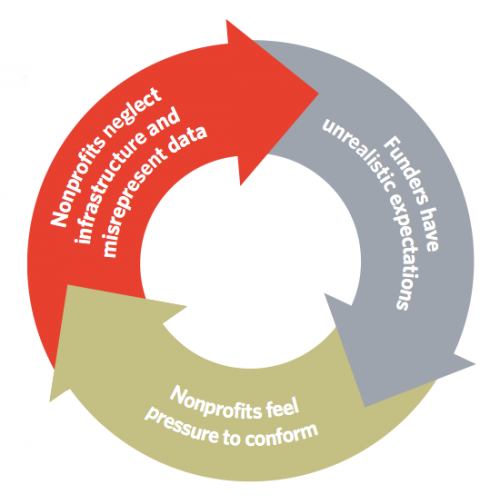 An article that confirms my anecdotal experience: “ The Nonprofit Starvation Cycle” from the Stanford Social Innovation review:

A vicious cycle is leaving nonprofits so hungry for decent infrastructure that they can barely function as organizations—let alone serve their beneficiaries. The cycle starts with funders’ unrealistic expectations about how much running a nonprofit costs, and results in nonprofits’ misrepresenting their costs while skimping on vital systems—acts that feed funders’ skewed beliefs. To break the nonprofit starvation cycle, funders must take the lead.

That quote is from the brief, yet the last sentence is misleading. According to the article change starts at the board:

Nonprofits must then speak truth to power, sharing their real numbers with their boards and then engaging their boards’ support in communicating with funders. Case studies of organizations that have successfully invested in their own infrastructure have repeatedly noted the need for a shared agenda between the leadership team and the board.

And the article is chock full of fun, familiar anecdotes:

Not only do funders and donors have unrealistic expectations, but the nonprofit sector itself also promotes unhealthy overhead levels. “The 20 percent norm is perpetuated by funders, individuals, and nonprofits themselves,” says the CFO of one of the organizations we studied. “When we benchmarked our reported financials, we looked at others, [and] we realized that others misreport as well. One of our peer organizations allocates 70 percent of its finance director’s time to programs. That’s preposterous!”

From Mission Measurement by way of Entry Level Living’s Allison Jones. Illustration by David Plunkert (it’s included in the article). 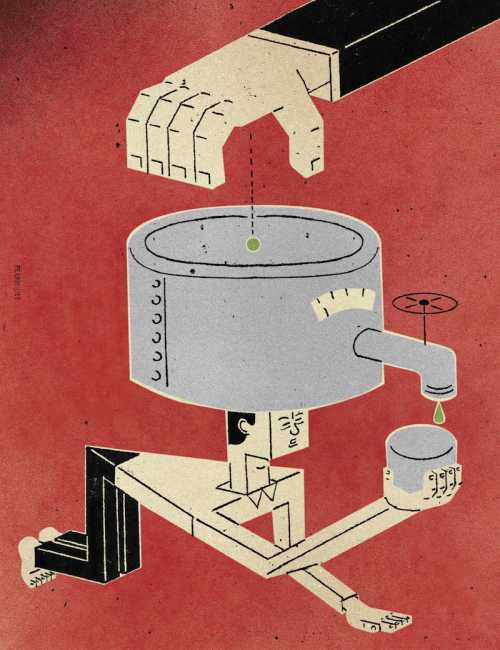 I hate to repost ironic internet memes, but this from reddit touches upon pedagogy and (attempts at) representing other perspectives. From the comments:

“Write me a letter from the point of view of [you name it].” This is a typical mistake made by middle class teachers who don’t -really- know what the world looks like through the eyes of somebody from a different background. . —

These sorts of assignments are bullshit anyway. The average letter anyone from any age would write would typically be banal and not cover significant historical aspects. The letter demanded by this situation would probably be full of family specific greetings and quotidian insights. I doubt a realistic letter would get good marks from the teacher though!

If they want an essay about a topic, they should just ask for one, rather than dress up the question in this way. —

In case you’re curious, this is the translated text:

My life here is terrible. Work environment is not great and benefits are little. But don’t worry, everyday only about 10 people are seriously injured and I’m very careful. We opened a small shop, business isn’t bad. Although I don’t understand very much English, but I can still understand what white men say. Hopefully we can become successful, I will work hard and take care of myself.

Are you guys well? Miss you very much, hope to see you again .—

Other examples mentioned in the comments are “Write a journal entry from the point of view of an English explorer seeing Africans for the first time” and “Write one set in the present day about if Germany had won WW2 (and had invaded the UK in doing so).”

From the introduction to “ Poverty and Charity in Past Times” by Mark Cohen (Journal of Interdisciplinary History 35.3, 2005, p. 354)”, an analysis of Catholic confraternities in the 16th century :

Traditionally, Catholic poor relief was shaped by the overlapping but distinct concepts of “charity” and “mercy.” “Charity” could exist between equals (neighbors, friends, and family), and “mercy” entailed transactions between the strong and the weak, the prosperous and the poor, etc. The evidence of mercy provided a soul’s defense at the Last Judgment; to neglect them was to court damnation. The rules of many Catholic institutions, including confraternities, were designed to ensure that Christians performed good deeds systematically. Many theologians validated good deeds even to the benefit of unworthy persons, regardless of any undesirable social consequences. Critics have argued that these Catholic doctrines encouraged dependence, palliated poverty, and probably fostered a class of professional beggars who traded on the belief that almsgiving was vital to salvation.

And an analysis of subsequent Protestant activities:

Catholic societies retained and expanded certain kinds of institution that were alien to most Protestant communities: hospitals for abandoned children; pawn banks, which lent money to the needy at moderate interest rates; and convent-like institutions for women whose honor was threatened or lost. Behind them, arguably, lie variations on the principle of tolerating a lesser evil to avoid a greater one. Protestant poor relief was an instrument for creating a disciplined society in which overt sinfulness was repressed, even though all human beings remained sinners. Catholic poor relief was more willing to accommodate sin and bring it to the surface—the better to counter it through conversion and penance—within the processes of redemptive charity.