With the political talk about Rush Limbaugh being in charge of the Republican party I—serendipously while cleaning out my office—came across a list of definitions for the US Right from Defending Democracry: An activist resource kit. In reading over the list, the question for me that comes to mind is: if that’s the Right, what is the Left?

There is much overlap and sectors are not mutually exclusive. Populist, apocalyptic, and conspiracist styles can be found in several sectors. Methodologies range from cautious moderation, to activism, to insurgency, to violence. Forms of oppression—racism, sexism, homophobia, antisemitism—vary in each sector.

Corporate Internationalists—Nations should control the ﬂow of people across borders, but not the ﬂow of goods, capital, and proﬁt. Sometimes called the “Rockefeller Republicans.” Globalists.

Regressive Popular Patriots—Secret elites control the government and banks. The government plans repression to enforce elite rule or global collectivism. The patriot and armed militia movements are one response from this sector. Americanist. Often supports Business Nationalism due to its isolationist emphasis. Anti-Globalists, yet support noninterventionist national security militarism. Repressive towards scape-goated targets below them on socio-economic ladder.

Far Right or Ultra Right—Militant forms of insurgent or revolutionary right ideology. Separatist or genocidalist ethnocentric nationalism. Reject pluralist democracy for an organic oligarchy that unites the idealized homogeneic nation. Conspiracist views of power that are overwhelmingly antisemitic. Home to overt fascists, neo-nazis, Christian Identity, Church of the Creator. 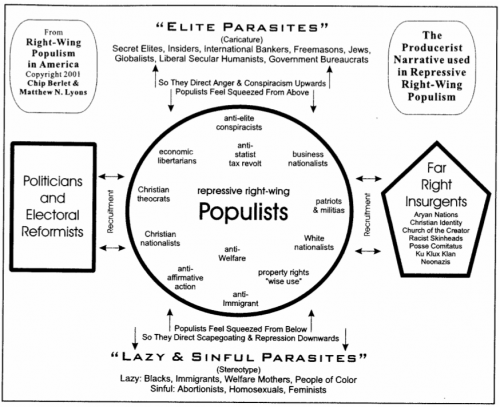 And as a chaser, it would be could to review The 7 Things Everyone Wants—specifically #4.