I added a new section to the website—books I’ve read; it’s something I’ve been meaning to do for a while. 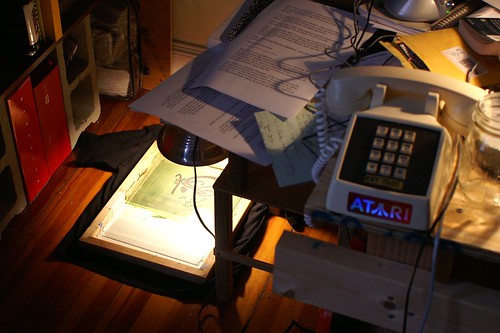 I was over at my pal Dean’s place in Jamaica Plain today. In addition to lots of semi-expired foodstuffs he snags from behind the Co-Op next door, he also has the screens and materials for t-shirt printing. Previously I had been helping him up in Lowell filming some promos for his Democracy Player channel, “Telemusicvision”:http://telemusicvision.com; today we were putting stuff on t-shirts.

The design I decided to print was one of the doodles I had done a week or so ago for the DigitalBicycle Project while waiting for Jessica to get done with her homework .

The process basically was:

Lately I’ve been spending more time than I should with a great free/open source software illustration program: Inkscape.

Before I get to far into an explanation of the fun and wonder I have with Inkscape let me make a little caveat. I’ve used Adobe Illustrator in the past and never liked it much; I admit though that I never really knew how to use it well.

With Inkscape–it’s available for Windows, Mac and Linux–I am very quickly and easily recreate the simple doodles I make during staff meetings. The tools ar quite simple and with a little bit of practice you’ll be making smooth shapes, clean gradients and surprisingly nice art. Seriously.

Inkscape is a vector drawing program, which means that you are creating basic shapes, and then deforming the shapes themselves mathematically. This is different from raster or bitmap drawing programs like MS Paint, Photoshop or The GIMP, in which you are modifying pixels. What the hell am I talking about? Basically, if you’ve ever tried to enlarge a image in Photoshop and had it turn into a grainy mess, you won’t have this program with drawings made and enlarged in Inkscape.

Another plus of Inkscape is that there are lots of great Public Domain/Creative Common graphics on the internet in Inkscape’s native format: SVG. This is doubly cool because once you get your mind around the idea that these graphics can be scaled and still look great, it’s no trouble at all to make ants eating houses or whatever scale destructing things strike your fancy. All with no blocks or jagged edges in sight.

I included an image I’ve recently done below. The graphic of the videocassette is public domain that I got from openclipart.com. I was in New York a few weeks ago for work/pleasure and stayed at my old roommate Greg’s place near 47th and Lexington. I snapped this one while coming back from B&H Photo where I talked on a panel about digital media distribution. 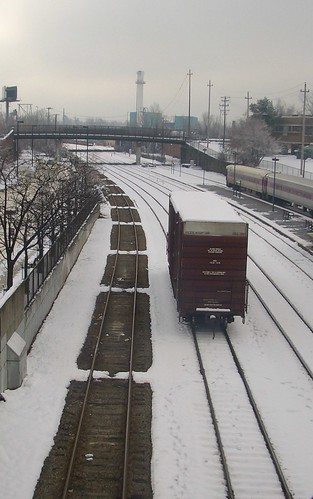 I commute by train to work every morning. Normally in Lowell the siderails are filled with boxcars. This morning they had left, but not without leaving evidence. 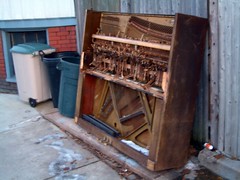 Desensitized to all the brightdangle and claptrap for purchase in the stores these days, I am mesmorized by the things people throw out and can throw out; this piano carcass being no exception. Jess and I were up at MIT to see a friend and coworker in a MIT Community Players production of Autobahn, a series of 7 one-act plays taking place in the front seat of an automobile, by Neil Labute. She was great, the plays themselves were ok and a little redundant by the end.

Leaving the building we had to tread through some relatively thick snow. We tried to follow the footprints of others, though as the photo shows, some of them were a little less than efficient at getting anywhere.

I snapped this photo just this morning. Lowell, America’s Venice is crossed with canals that have just started to freeze over. The leaky drainpipe is keeping the ice from fully freezing, and the tree is still holding on to some of its leaves.

cankle (cang·kel): n. the lower leg of one whose calf and ankle are not clearly differentiated. Jess and I were out with her coworker Liz and fiance Adam tonight when we heard this gem for the first time. We were talking about all sorts of blending: back acne: backne; gigantic-enormous: ginormous, smother- suffocate: smufficate. How appropriate that we were eating out at Jose McIntyres: an eclectic and moderately edible mix of Irish pub and Mexican food. This evening I headed up to the Somerville Central Public Library and checked out the opening exposition of the Somerville Mapping Project, on display through the end of December. It was awesome.

All kinds of individuals, young and old, mapped out on poster board some things that they identified with, liked, disliked, or perhaps just wanted to share with others. There were old photos from the Blizzard of ‘79 and of mom-and-pop stores driven out of business by regional retailers; news articles and notes. These were connected with colorful string or pipe cleaners to their geographical locations on base maps of Somerville.

In addition to these individual projects, everyone collaborated together on one large map, maybe 7 feet square, and mapped out everything from mailboxes, to empty lots and favorite spots in Somerville. There were some really neat cutouts where you could see some locations at different times of the day.

Most exciting of all though was the use of audio recordings. CD players were lent out at the door and you could walk around listening to different people discussing their maps and their community. Little pictures of headphones and number on maps alerted you to set that track on the CD player to listen to an audio accompaniment.

There was a great turnout of community members and some delicious food at the exposition. I was greatly impressed as well with the level of inclusiveness: all of map explanations were translated in English, Spanish and Portuguese. A Spanish translator was in attendance as well and wove in and out of the speeches and recruitment calls made by the organizers at SNC (Somerville Community Corporation) and ESNC (East Somerville Neighbors for Change)

I am glad I went and found a lot of great ideas for the community mapping project I’m organizing in Lowell.