Note: These types do loosely overlap; charitable donations probably make up the majority of transactions. 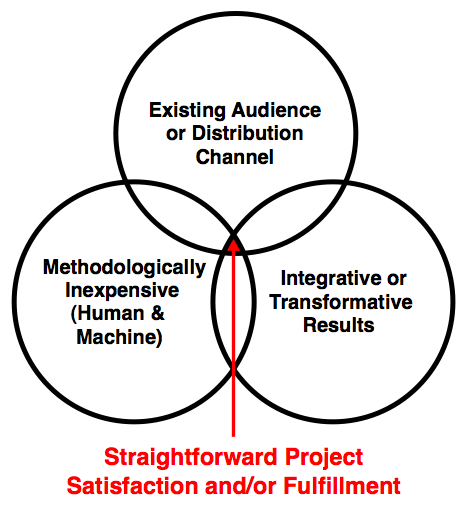 Another sketch from my notebook.

From Making Sense of Change Management by Esther Cameron and Mike Green.

This past week, it was revealed that Apple would no longer allow charities to take donations through iPhone apps. Their rationale is that they can’t verify the donations are actually going to the charity they claim to be going to, and while that seems logical on the face of things, it presents a major roadblock for nonprofits seeking to build their donor bases. So if your app’s primary purpose is to solicit donations, you may want to rethink your strategy, and consider creating something that encourages volunteering, activism, or awareness-building instead.

In that last sentence, you can replace “app” with nearly any other activity and it still is good advice.

From my reading of things, Apple allows you to solicit giving (“Give the maker of this app 5 dollars”), it just doesn’t allow you to solicit charity (“Give the maker of this app 5 tax-deductible dollars so that they can give it to a nonprofit who will give it to the poor minus administrative overhead.”). I don’t particularly blame Apple, since verifying 501(c)3s is a pain… or at least PayPal seems to think so since they make me fax our IRS determination letter about every 6 months.

From Zen and the Art of Postmodern Philosophy by Carl Olsen (I added paragraph breaks):

Within the context of postmodern art, Mark C. Taylor identifies, for instance, two processes at work: disfiguring and cleaving. These two operations are identified by Taylor in his attempt to grasp the chora, a nonexistent that stands behind being and becoming, makes possible all existences, and forms the essential space where both form and copy are inscribed.

The operation of disfiguring is connected to activities like marring, destroying, deforming and defacing in a process of negation or deprivation that also includes the negation of the notions of calculating, considering, and comprehending. By enacting denegation in the realm of form, the process of disfiguring interweaves revelation and concealment and presences and absence which allows for “both a re-presentation and a de-presentation.” If the artist removes, deforms, or defaces a figure and destroys its beauty, he/she leaves a trace of something that is other, which is itself neither being nor nonbeing, present or absent, immanent nor transcendent.

Associated with the notion of disfiguring is that of cleaving, which suggests both dividing and joining as well as separating and uniting. Cleaving is an operation that allows opposites to emerge and remain suspended in a process that is unthinkable and beyond the distinction of identity and difference.

The dual processes of disfiguring and cleaving are indicative that there can be nothing original from the postmodern perspective because such operations render everything secondary due to the tendency of the postmodern artist to disjoin, fragment, distort, and partially destroy a work of art in order to figure what cannot be figured.

Dōgen further develops his interpretation of the painting of the rice cake by discussing unsatisfied hunger, which symbolizes the illusion of sentient beings for Dōgen. Hunger is used as a metaphor and/or symbol by Dōgen to illustrate the condition of illusion. By becoming detached from the opposites of enlightenment and illusion, a person loses his/her hunger. Dōgen indicates the nondualism of his position in the following way: “In reality there is no hunger of rice cake conflicting with each other, but when you think you are hungry the entire world becomes hungry; conversely, if there is a real rice cake it exists everywhere!” Prom this viewpoint, since an eatable rice cake and a pictorial representation of a consumable rice cake are both empty, either one can satisfy a person’s hunger, and are examples of ultimate reality in diverse forms. Moreover, an insightful observer of a painting can see, for instance, both movement and inertia, the way of practice, truth of the Buddha’s teaching and of the painting itself, the entire universe is manifested in the painting, and one can find one’s true self in the painting. Therefore, viewing a painting possesses the potential to lead one to an awakening, which functions to actualize the painting.” Thus a painting, from Dōgen’s perspective, can satisfy one’s hunger.

In other words, by intuiting mediation one can transcend it. But in conclusion:

In comparison to Taylor’s notions of disfiguring and cleaving and his emphasis on the surface of a work of art, Dōgen grasps a depth and mysteriousness (yūgen) to a work of art, whereas Taylor seems content with initiating a nonstop dialectic that gives birth to a double negation, a negation of negation. Dōgen and Taylor agree that we exist in a world of flux, although Taylor disagrees with Dōgen that we can catch a glimpse of the eternal in the world of flux. Rather than disfiguring or cleaving a work of art, Dōgen lets it be itself and does not seek to mark or spoil it in any way.

I’ve been kicking this idea around my notebook for a while; I hope it requires no further explanation. 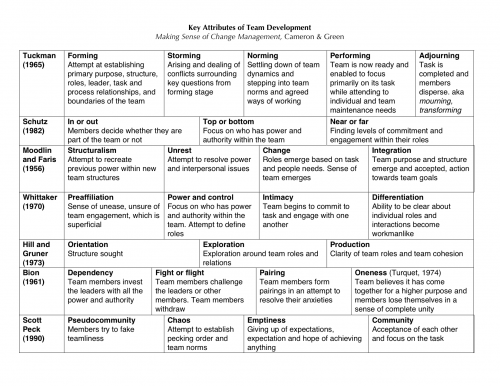 I nearly always see the “Forming, Storming, Norming” team development model in use for community practice. So here are a handful more from Making Sense of Change Management by Esther Cameron and Mike Green. View the  larger image or download a PDF. 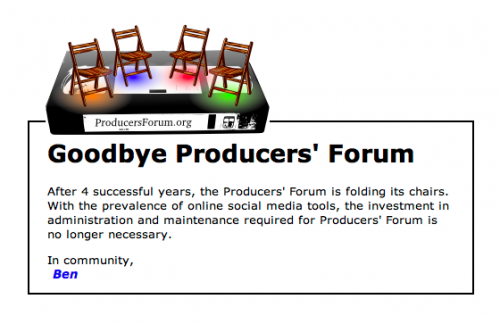 I launched ProducersForum.org 4 years ago. At the time there was a need for a “Yahoo Groups”-functionality that offered:

It seems rather quaint now, but there was a need for this for community media groups in 2006. Built using Drupal, it is the only website I know that followed Zack Rosen’s Magic Groups recipe to turn Drupal into a mailing-list manager that could create an arbitrary number of email lists, allow users to post via email or via the website, and archive beautifully-threaded conversations on the website. Built with Drupal 4.7, I learned quite a bit in optimizing user workflows and smoothing Drupal’s poorly executed content creation interface. 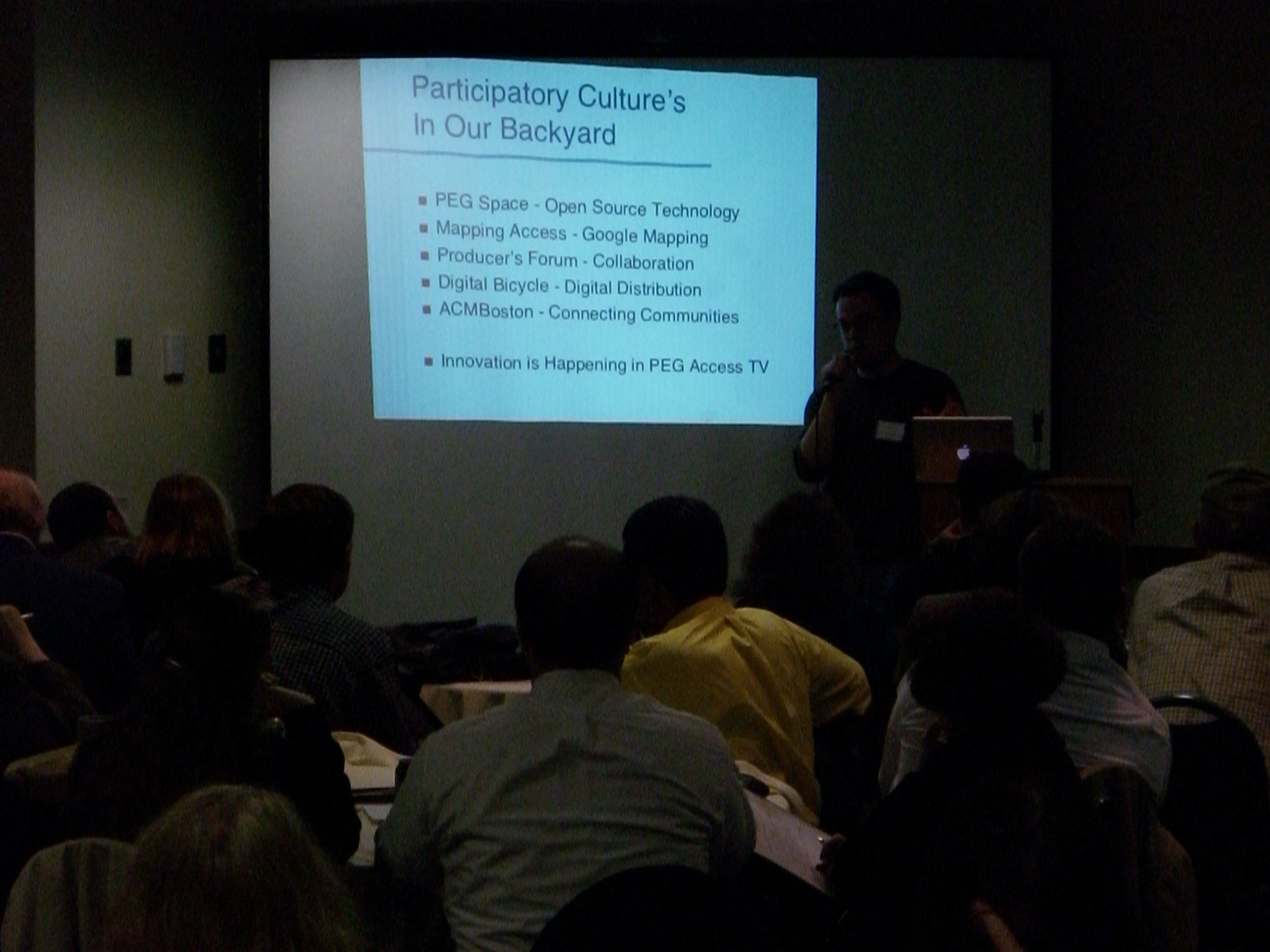 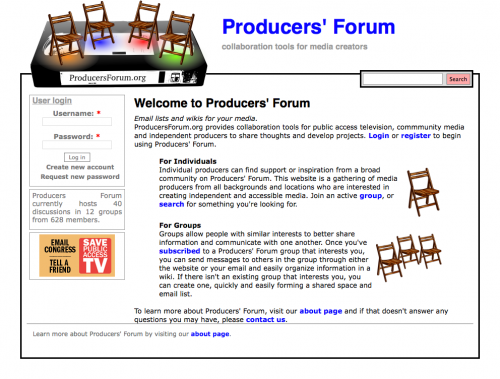 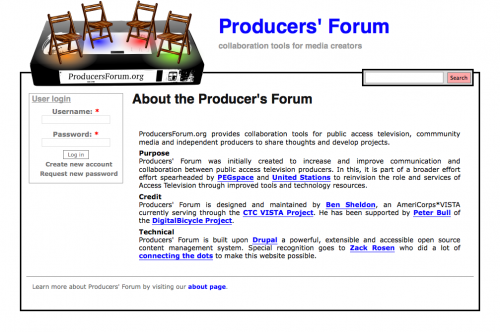 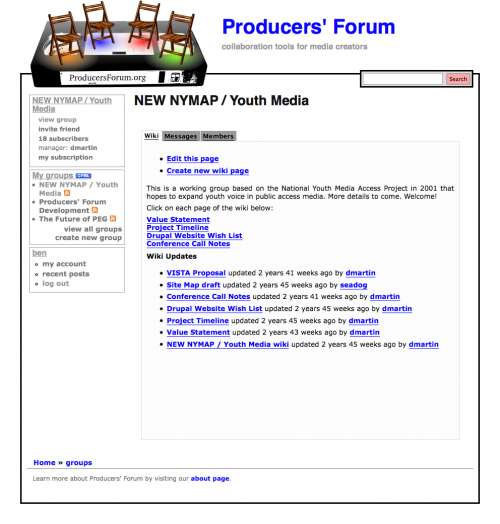 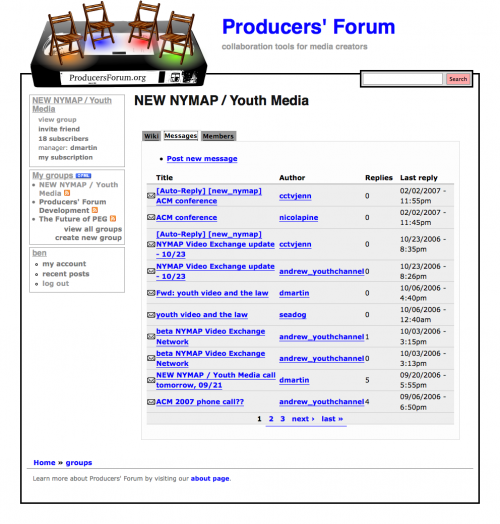 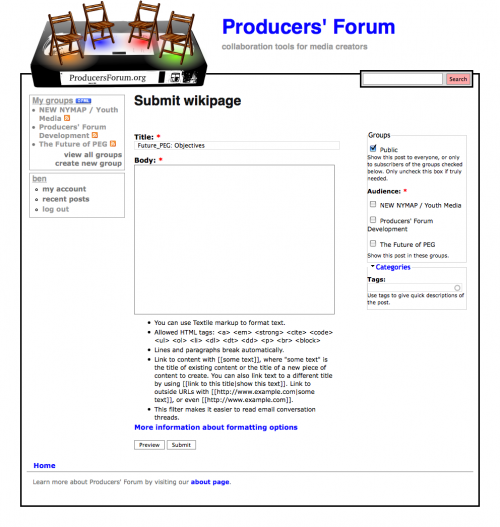 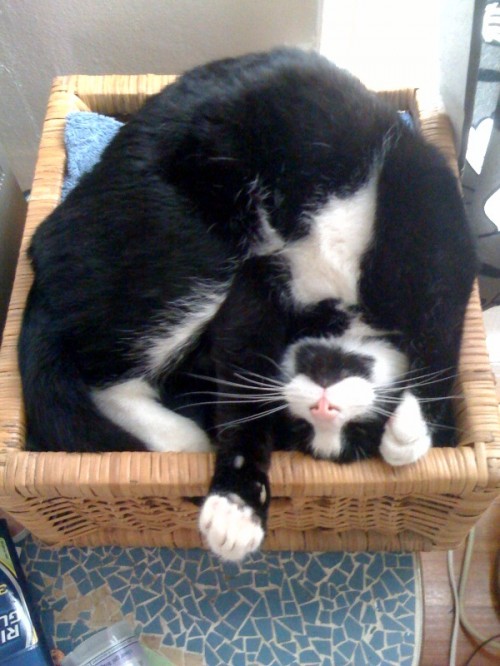 Peter Elbow on free writing, from the book Writing without teachers (1973):

There is a paradox about control which this kind of writing brings into the open. The common model of writing I grew up with preaches control. It tells me to think first, make up my mind what I really mean, figure out ahead of time where I am going, have a plan, an outline, don’t dither, don’t be ambiguous, be stern with myself, don’t let things out of hand. As I begin to try to follow this advice, I experience a sense of satisfaction and control: “I’m going to be in charge of this thing and keep it out of any swamps!” Yet almost always my main experience ends up one of not being in control, feeling stuck, feeling lost, trying to write something and never succeeding. Helplessness and passivity.

The developmental model, on the other hand, preaches, in a sense, lack of control: don’t worry about not knowing what you mean or what you intend ahead of time; you don’t need a plan or an outline, let things get out of hand, let things wander and digress. Though this approach makes for initial panic, my overall experience with it is increased control. Not that I always know what I am doing, not that I don’t feel lost, baffled, and frustrated. But the overall process is one that doesn’t leave me so helpless. I can get something written when I want to. There isn’t such a sense of mystery, of randomness.

This paradox of increased overall control through letting go a bit seems paradoxical only because our normal way of thinking about control is mistakenly static: it is not development or process-oriented because it leaves out the dimension of time. Our static way of thinking makes us feel we must make a single choice as to whether to be a controlled person or an out-of-control person. The feeling goes like this: “Ugh. If I just write words as they come, allow myself to write without a plan or an outline, allow myself to digress or wander, I’ve turned into a blithering idiot. I’ll degenerate. I’ll lose the control I’ve struggled so hard to get. First I’ll dangle participles, then I’ll split infinitives, then I’ll misspell words, then I’ll slide into disagreement of subject and verb. Soon I’ll be unable to think straight. Unable to find flaws in an argument. Unable to tell a good argument from a bad one. Unable to tell sound evidence from phony evidence. My mind will grow soft and limp, it will atrophy; it will finally fall off. No!  I’ll be tough. I won’t be wishy-washy. I’ll have high standards. I’ll be rigorous. I’ll make every argument really stand up. I won’t be a second-rate mind. I’m going to be a discriminating person. I’m going to keep my mind sharp at all times.

But this static model isn’t accurate. Most processes engaged in by live organisms are cyclic, developmental processes that run through time and end up different from how they began. The fact is that most people find they improve their ability to think carefully and discriminatingly if they allow themselves to be sloppy and relinquish control at other times. You usually cannot excel at being tough-minded and discriminating unless it is the final stage in an organic process that allowed you to be truly open, accepting—even at times blithering.

You can encourage richness and chaos by encouraging digressions. We often see digressions as a waste of time and break them off when we catch ourselves starting one. But do the opposite. Give it its head. It may turn out to be an integral part of what you are trying to write. Even if it turns out to be an excrescence to be gotten rid of, if it came to you while you were thinking about X it must be related and a source of leverage. And you may not be able to get rid of it completely unless you see more of it. Almost always you cannot disentangle the good insight from the excrescence until after you have allowed the digression to develop. At the early stage the two are so intertwined that you can’t tell one from the other. That’s why it feels both interesting and wrong. There are concepts in there that you haven’t yet learned to discriminate.