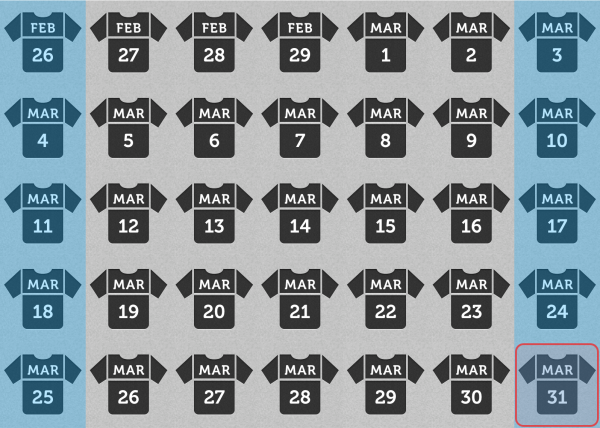 Day of the Shirt continues to delight me. I added a fun but subtle feature back in January: updating @dayoftheshirt’s Twitter avatar to today’s date. Day of the Shirt makes of point of being “refreshed every day” so since it’s tweeting out daily list of shirts, it makes sense to have a fresh daily avatar too. In addition to delight, Day of the Shirt is moderately successful too: while not hockey-sticks, I’m seeing 50 - 100% unique visitor growth month-over-month; and ~80% of my daily traffic is returning visits. Day of the Shirt went from about an average of 50 unique daily visitors in October, 2011 to an average of 1100 in March. Adding the “Like on FaceBook” widget at the beginning of February boosted new visitors too; in 2 months, Day of the Shirt has nearly twice as many Facebook “Likes” than it does Twitter followers, and Facebook drives ~150% more traffic than Twitter. In terms of the future, Day of the Shirt is reaching the limit of its current architecture—rewriting a static HTML file—which was cute originally. Day of the Shirt launched with 5 daily shirts and now it aggrates 13 daily (and a few semi-weekly) shirts. Putting it on an actual framework would make adding new shirts and testing/updating the templates much simpler and more reliable. I’m a bit caught-up on what I’ll move to (Django is in the lead), but I expect the experience to stay the same.