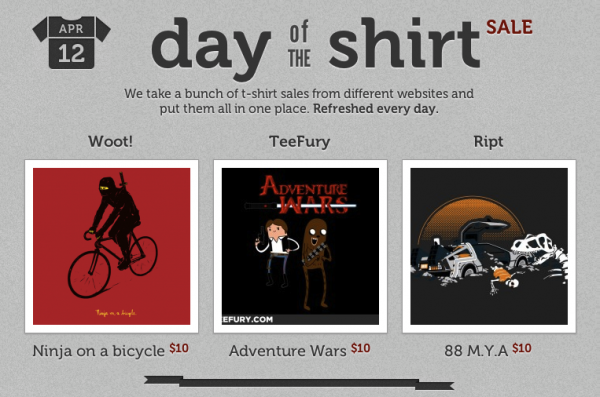 I am remiss to finally get around to blogging Day of the Shirt, which I launched back in October, 2010. It’s a straightforward and (hopefully) aesthetically-pleasing t-shirt aggregator.

What’s nifty about Day of the Shirt is that it’s built entirely with  PHP Simple HTML DOM Parser. And when I say entirely, I mean entirely: there is no database backend, everything is scraped, including itself. Day of the Shirt…

That last step is a little extravagant, but I wanted to separate the early-morning website update from the mid-morning tweeting—otherwise only the early birds would ever see the tweet. Of course, I re-used the tweet-composing algorithm from Panlexicon.

Now the unfortunate part of this project was that I did a fair amount of competition research prior to building this website—but it wasn’t until about a week after I launched that I discovered an equivalent service: Tee Magnet. C’est la vie.