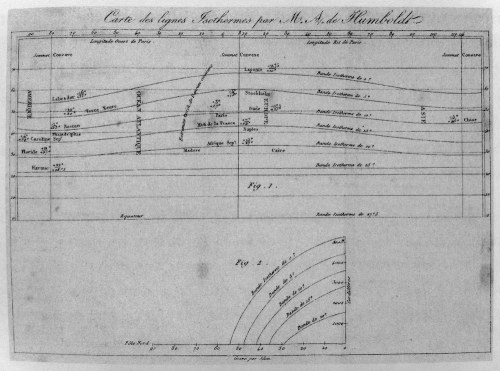 Armed with impressive arrays of accurate instruments, [Alexander von] Humboldt demonstrated that accumulating meticulous measurements could reveal patterns in nature’s vagaries, and so impose mathematical order on variable phenomena such as air pressure, magnetism, and plant distribution. Figure 33 [above] shows his visual argument that there must be general laws describing how temperature varies across the Earth’s surface. Humboldt’s chart stretches from the east coast of America on the left over to Asia on the right, and it illustrates a new and crucially important statistical approach to nature. Instead of plotting actual temperatures on any particular day, Humboldt calculated the annual mean temperature for each place, thus amalgamating many thousands of observations into a few curved lines, called isotherms. By averaging out fluctuations, Humboldt ordained and displayed global regularity.

Humboldt was a visual innovator. Although it now seems obvious that diagrams enable scientists, advertisers, and politicians to summarize evidence and present it persuasively (if not always fairly), Figure 33 is an extremely early example. In the first half of the nineteenth century, graphs, bar charts, and so forth were only just being introduced, and they were slow to catch on. Scientists trying to interpret diagrammatic data had to learn a new visual language—just like reading, deciphering graphs and maps only becomes automatic with practice. Even contour lines, which directly represent actual mountain heights, seemed alien and were not routinely used until the early twentieth century. Humboldt’s isotherms involved yet a further conceptual leap, because they were idealized summaries with no physical reality. By recording averages as lines, Humboldt made statistical regularities visible, short-circuiting masses of detailed numerical readings to present scientific relationships at a glance.

This impetus to think and understand through diagrams was encouraged by new printing techniques, which made it possible to reproduce images cheaply and also to incorporate them within the text rather than binding in separate sheets of paper. Gradually, ingenious visualizing techniques became important in many scientific disciplines. Faraday, for example, knew little mathematics but was an inspired three-dimensional visualizer who developed the concept of electromagnetic fields by imagining lines of force extending out through space with a quasi-real existence. Geology’s great visual innovator was Darwin’s friend Charles Lyell, who included an increasing number of diagrams in successive volumes of his hugely influential Principles of Geology (1830–3). As geologists learnt how to interpret schematic cross sections down through the Earth’s crust, they gradually acquired the skill of automatically translating the vertical scale into vast expanses of time.