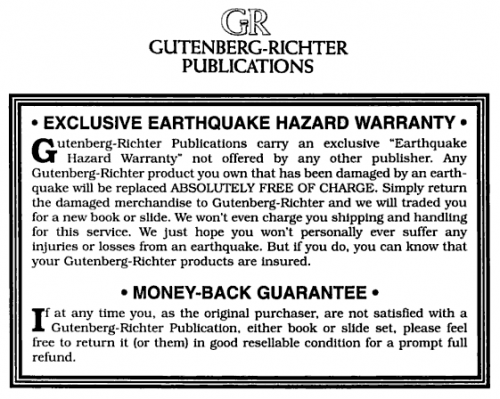 The title promises two tales; both are actually the same story, told with different levels of detail and suspense. The first is from _The Earthquake that America Forgot _by Dr. David Steward and Dr. Ray Knox. (These authors have a whole series of books about the New Madrid earthquakes, all of which seem to include the tongue-in-cheek warranty above.)

One hundred miles south of the epicenter of the first great 8.6 quake was Island #94. Vicksburg, Mississippi is near that location today. It was known as “Stack Island” but also as “Crow’s Nest and “Rogue’s Rest.” It was inhabited by pirates. Crow’s Nest was well-suited for staging an ambush on boats that could be spotted approaching the island several miles away in both directions and because boats had to thread a long narrow channel called “Nine-Mile Reach” on one side of the island.

It just so happened that on Sunday night, December 15, a Captain Paul Sarpy from St. Louis had tied up his boat for the night on of the the north end of Island #94. He was accompanied by his crew and family.

In those days the river was too treacherous to ply by night. There were shifting sand bars and many snags and stumps that could damage, sink or capsize a boat. There was no U.S. Army Corps of Engineers, as we have today, to dredge the river, mark it with buoys and stabilize the channel with jetties and dikes. Neither were there any lights on the banks for pilots to sight in making their turns through the many bends of the river. River maps were also poor and unreliable. Zadok Cramer’s Navigator was the newest and the best, but it was only updated every year or two, while the river changed constantly. Therefore, it was the custom for boatman to tie up at night and travel only by daylight.

Captain Sarpy didn’t know about the pirates. When he landed, he and several crew members went ashore to get some exercise and stretch their legs. As they strolled through the trees, they came upon an encampment of pirates. Tehy had not been seen. Hiding where they stood, they listened, overhearing the pirates’ plans to ambush a boat with a valuable cargo and “a considerable sum of money” that was supposed to pass by any day, now, on its way from St. Louis to New Orleans. As they eavesdropped with intense concentration, crouching behind the bushes, they overheard a name. “Sarpy.” It was Sarpy’s boat they were after!

Slipping away without being discovered. Sam and his men went back to their boat. Late that night, under cover of darkness, they drifted around the island undetected by the pirates. They tied up downstream hust far enough to make a quick getaway when daylight came.

During the night strong vibrations shook their boat. At first they were afraid the pirates had found them and were boarding for plunder. But no one came aboard. The tremors continued, accompanied with the agitation of large waves that rocked their boat.

That morning, in the dim dawn light as the fog and mist began to clear, Sarpy’s sailors looked upstream. Island #94 had completely disappeared—pirates and all!

For a hundred years there was no Stack Island, no Island #94. Since then the river has redeposited another body of sand in that location which carries the same name and number today. But it is not the same isle where Captain Sarpy so narrowly escaped a brutal ambush and was saved by an earthquake.

Further to the north, at the end of Long Reach, near the present-day town of Osceola. was Island #32. You won’t find it on any modern navigation maps. There is an Island #31 and an Island #33 but no Island #32. It, too, was to disappear in the darkness of an early December morning—but not yet. As of December 16, 1811, Island #32 was still there, but its was days were numbered. In less than a week, it, too, would follow the fate of Island #94.

I suspect the previous story is quite close to the St. Louis Globe Democrat’s “The Last Night of Island Ninety-Four” which is mentioned in our next story, coming from Jay Feldman’s When the Mississippi Ran Backwards:

A tale published in the St. Louis Globe-Democrat in 1902 purported to tell the story of “The Last Night of Island Ninety-Four.” According to this account, on the evening December is, a Captain Sarpy was enroute from St. Louis to New Orleans in his keelboat, the Belle Heloise with his wife and daughter and a large sum of money. At nightfall, the keelboat tied up at Island 94. This island had been a long-standing lair for river denizens of every stripe, including Samuel Mason, the notorious river pirate who had been apprehended in Little Prairie a decade earlier, only to escape while being transported on the river. Two years before Sarpy’s trip, however, a force of 150 keelboatmen had invaded the island and cleaned out the den of thieves, after which the island became a safe haven, and now, Sarpy thought to use the island’s abandoned blockhouse to lodge his family and crew for the night.

As Sarpy and two of his men explored the island, however, they overheard talking in the blockhouse and, peering in the windows, listened as a group of ﬁfteen river pirates discussed plans to fall upon the Belle Heloise the following morning. Sarpy and his crewmen hurried back to the boat and quietly pushed off, tying up at a hidden place in the willows on the west bank about a mile below Island 94.

The following morning, after weathering a night of earthquakes, Sarpy looked upstream to see that Island 94 had disintegrated—the entire landmass was gone, and presumably, its criminal inhabitants along with it.

Whether or not the story is true, Island 94 did indeed disappear.