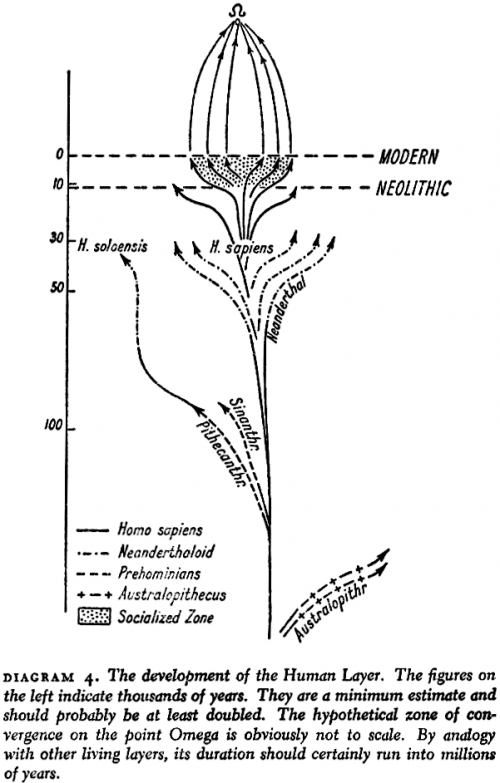 Following up on som graphics from the free book pile at the university, above is a graphic from Pierre Teilhard de Chardin’s The Phenomenon of Man. There are only 4 plates in this book (it’s the 1975) edition, but each one takes on a very plant-like appearance. (I think this plate is superior to the current reprint because mine uses stipple points rather than hash-lines to show contrast; it’s also typeset in Arial, but that’s just being picky).

Tielhard puts it all within Christian dogma (he was a Jesuit), but the Omega Point is pretty nifty. Briefly from Wikipedia:

The complexification of matter has not only led to higher forms of consciousness, but accordingly to more personalization, of which human beings are the highest attained form in the known universe. They are completely individualized, free centers of operation. It is in this way that man is said to be made in the image of God, who is the highest form of personality. Teilhard expressly stated that in the Omega Point, when the universe becomes One, human persons will not be suppressed, but super-personalized. Personality will be infinitely enriched. This is because the Omega Point unites creation, and the more it unites, the more the universe complexifies and rises in consciousness. Thus, as God creates the universe evolves towards higher forms of complexity, consciousness, and finally with humans, personality, because God, who is drawing the universe towards Him, is a person.