For Christmas, my friend Danielle bought me the book, The Tree of Knowledge: The Biological Roots of Human Understanding.  It’s getting a little long in the tooth near page 150, but I really like how they go about building up their argument.  Specifically, how they define Destinctions.

I’ve been accused in the past (by my own mom, for one) of being semantic.  Well, this is all of semiotics (of which semantics is just one part, along with syntactics and pragmatics).  So too bad.

The book builds upon the idea of “knowing how we know” and argues from the basic standing that “all doing is knowing and all knowing is doing” or “everything said is said by someone”.  They begin with the point that in creating knowledge, we are performing an act of Distinction: separating something from its background based upon certain criterion.  This something (being, object, concept, etc), is called a Unity.  Conversely, each time we refer to something (a Unity) in conversation, we are performing an act of Distinction.  A unity can be anything from a person, to a species, to an object, to a color, to an emotion, to a concept, to 1 of 100 different names for snow (which is an urban legend, by the way.

I found that to be an incredibly interesting way of breaking down understanding.  Building upon the core idea of Unity, I wanted to propose some additional building blocks of meaning that are commonly used in conversation, rhetoric and didactics (and easily found elsewhere on this blog). 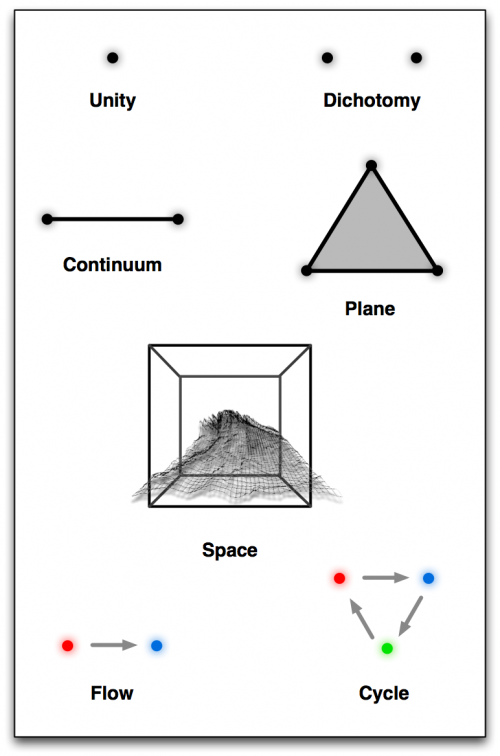 A Dichotomy is choosing between two unities that are mutually exclusive.  Dichotomies (and false dichotomies) are easily used and abused in arguments and rhetoric—some go so far as to say the West is an Argument Culture where middle alternatives are ignored.

A Continuum is a linear series capped by two Unities.  Sometimes there is meaning along the line, but the meaning primarily is a function of proximity to one unity or the other.  Probability is a simple continuum, capped at one end by absolute certainty, and absolute non-certainty at the other.

A Plane (or Field) is an flat-area bounded by multiple  unities.  Creating meaning from one’s position within the plane becomes more difficult to communicate unless in close proximity (or far distant) to a unity.

A Space is the most complex construction of meaning in which many unities are “mapped” out.  For such a construction, pointing out significant features (low-points, high-points, etc.) are the only way to communicate meaning about a space.

Ending with spaces, it’s interesting to note that the realm of human understanding (as bounded by our senses and cognition) is still a simplification of the complete space of possibility.  Even so, simpler and simpler constructions are made in order to successfully communicate.

Of course, definitions need not be static.  Because of that, I propose two ideas of movement or state change.  Flow is the change from one state of unity to another; a meta-dichotomy.  A frog may flow through the states of egg, tadpole, and adult.  A Cycle is a flow that iterates multiple times.

And for recursions sake, by defining these concepts, or applying these definitions to something, we are performing an act of distinction.