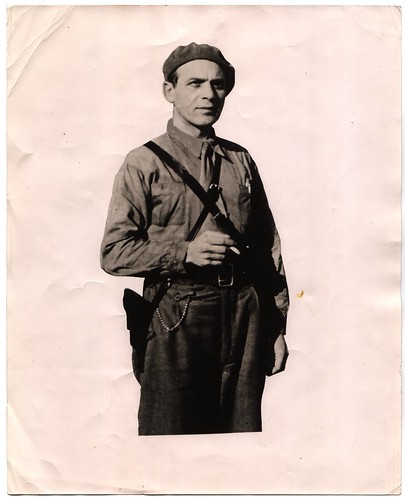 It’s been about 3 years since I started and I’m excited to finally be rolling out a digital version of my late grandfather’s autobiography, American Commissar. The book follows my grandfather from Hungary to America as an immigrant in the 1920s; his entrance to the communist party and their activities during the 1920s and 30s; his wartime experiences serving with the Abraham Lincoln Brigade in the Spanish Civil War; and his frustration and disillusionment with the international Soviet communist movement. The book is human, funny, and—my grandfather being an accomplished playwright—well-paced with memorable scenes and stories. Seriously.

I will be posting one chapter from the book each week—there are 60 total plus an epilogue—on a blog specially set up for the purpose: http://americancommissar.wordpress.com

While I would not characterize the past 3 years as “steady progress” towards my goal of fully digitizing the book, I’m really happy to be entering the finale. The book itself is nearly 500 pages—which I have been scanning, converting to text (OCR) and proof-reading against the original text. Published in 1961, my family is pretty sure the book has entered the Public Domain—my mom and I have researched the laws (yuck), as well as contacting the original publisher and Adelphia University, who maintains his archive.  When I’m finished I’ll be submitting the entirety to Project Gutenberg.

In addition to my own personal interest in the work, I think the book has enduring lessons. As a 2nd generation American citizen, the experience of confused immersion and material poverty is so distant; as is the experience of the early-20th century, which few history books expose from such unique points of view. Fighting against the Fascists during the Spanish Civil War, my grandfather would today have been classified as an “unlawful combatant” or terrorist; yet at the time was cheered both locally and abroad. Most enduringly, I think his view of community organizing and his experience with the American Communist Party at the time is profound: the radical populism of the American Communist Party was one of the few movements actively advocating for the social services we take for granted today like Medicare, Social Security and unemployment insurance. As my grandfather argues, it was these evolutionary reforms that protected the American way of life (enduring freedom and opportunities) from Soviet style revolution—a movement that at its end my grandfather became disillusioned with and he worked the rest of his life to distance himself from.

While the book is a harsh critique of the Communist Party, I think my grandfather’s hope, optimism, and well-intentioned desire for positive change—topical concepts for today—are the book’s strongest themes; though I admit I am of a much different generation than both my parents and my grandfather’s contemporaries.

So I hope you will subscribe to the blog and read my grandfather’s book at http://americancommissar.wordpress.com