My RSS feeds of late have been delivering to me many interesting posts by Chris Anderson as he explores the different kinds of free. I’ve been specifically interested in his visualizations of the Advertising Model of Free: advertisers pay for advertising, which subsidizes programming, which is then given away for free, with the goal being that consumers will purchaser those original advertiser’s products. There is a great explanation of how broadcast advertising works in the Denver Open Media’s Opening Access video (at about the 1 minute, 30 second mark).

Chris Anderson’s graphic of the same thing is below (C is Consumer, P is Producer, A is Advertiser):

This model of Free is very similar to the standard nonprofit model of giving: Foundations/Donors (D) provide support to Nonprofit Organizations (NP) which then provide free services to Clients/Constituents (C): 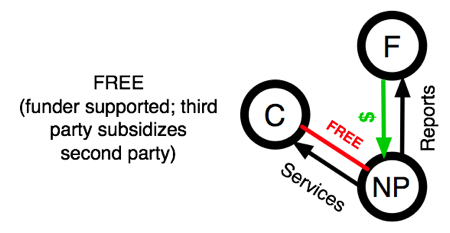 That all being said, the nonprofit model doesn’t quite have the same symmetry. In fact, it’s missing a piece that, at least in my experience, very rarely is talked about: what is the relationship of Foundations/Donors to the Clients/Constituents?

I’ve previously explored some of the reasons why nonprofits have arisen in the way they have, including middle-class guilt about the disparities between the affluent and the poor; wealth-transfer mechanisms for the rich; dissatisfaction with the profit motive as an incentive to extract work and induce consumption; greater abundance in society general; and the inability for government agencies to provide services to meet growing needs as a result of the widening gap between rich and poor.

Putting those in context of clients/constituents, the actual people being served, there isn’t that much of a relationship: as a person receiving assistance, one would not care much weather it was coming from the Ford Foundation or the Carnegie Foundation—it is the quality and efficacy of the services that matter, and those are being delivered via the nonprofit.

One way to look at this (and there are many), is to think of the Clients/Constituents as just one part of the larger Society (S):

In this case, what is being transferred between Foundations/Donors and Society in general: reputation, legitimacy, restitution, validation….? That’s an interesting question.