Staying in the condiment vein…

I am in San Francisco this weekend for Vloggercon, a yearly meetup of the video blogging community. The conference went Saturday and Sunday, but I flew in Thursday afternoon and so had all of Friday free. I decided to spend it hiking in the Presidio.

I’m staying with an old friend just North of Golden Gate Park; I just started walking North and eventually I reached the path that runs just beneath the Presidio golf course. This path I took up past Mountain Lake and out to Baker Beach. Just topping a rise, I saw my first view of the Pacific Ocean in over a year; it’s been a long time.

Baker Beach is beautifully rough and exposed to the Pacific; short and rising dunes slope up to windsept and carpetted evergreens. There were several fisherman out with pole stands and beer coolers in the early afternoon.

From Baker Beach I hiked up the hills, tracing the 2-lane road rising towards the Golden Gate before dipping away down the trail to old concrete bunkers and gun emplacements. Crossing under the toll plaza, I came out to an emaculately flowered path and prime tourist spot beneath the Golden Gate gift shop. Rental bicycles huffed their way by me as I headed to the lookout for some photo snaps, and then down and around towards Fort Point, the only reinforced masonry fort on the America’s West Coast.

On my way down, I passed by some Park Rangers and volunteers working in the coastal scrub. I talked with Ranger Michael Chasse of the National Parks Service about the work they were doing in the Presidio.

Michael told me that much of the National Parks Service’s resources at the Presidio go into habitat restoration and invasive species removal. When I met with Michael on the trail, he was in the process of removing an immense pile of wild mustard, which I correctly identified as an invasive. Most invasive species removal takes place around paths and parking lots, where foreign seeds can hitchhike in on visitors cars, shoes’ and clothing. Once established, these species can displace native ones and change the habitat, affecting the survival of other species and the health of the local ecosystem. 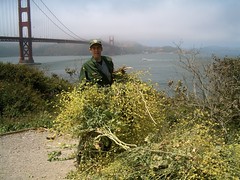 Habitat restoration is important as Presidio is home to 3 endangered species and 10 threatened ones. San Francisco itself has amazing biodiversity, with over 1000 species living within the city’s seven square miles; that is more species than some states have!

The Parks Service has had much success in restoration since the Presidio was ceded by the military in 1994. Just a few years ago the Western Bluebird returned to Presidio, where it had long been absent. Also, Michael explained that they have been pleasantly surprised by the areas restored in recent years; these areas have proven remarkably resilient to further invasions.

I thanked Michael for talking to me and left him compost as I headed down to Chrissy Beach.

On Chrissy Beach, I discovered some amazing Dune Strawberries. Criss-crossed with runners, these small plants blanketed the high beach and produced bright red berries which, even this early in the season, were refreshingly sweet, though disappointingly small.

From Chrissy Beach I passed the marsh and then hiked across Chrissy Airfield before walking up through the Presidio Complex, following Arguello up a steep grade lined with blackberries, evergreen and oak.

At the top, I crossed through an amazing glen of sloping, ivyed (another invasive) trees, where a dog-walker and former investment banker ran his herd of about 20 dogs. I spent quite some time patting and scratching their fuzzy hides before heading back down into the city.