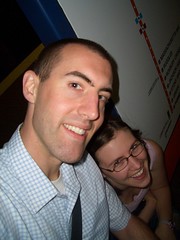 This morning, coming home from my gym I went down into the Chinatown T-stop ( here). For the past few months, the escalator has been out of service and over that period become increasingly dismantled. In my investigation of this I would find I had become (booming voice) a defender of democracy-ocracy-cracy.

I find most mechanical things neato, especially when large, dirty and taken apart. Due to this, I happily pulled out my camera and began taking a few pictures of the escalator husk because, hey, why not. Little did I know that I could be abetting… a terrorist.

Fortunately for myself and my nation, the T attendant came out of her box and asked, “Are you supposed to be doing that?”

Feeling a bit like Galileo, I hesitatingly replied, “Umm, no.”

“You can’t be taking pictures of that. There are terrorists and we need to protect the station. You will have to delete those pictures”

Rather than point out that terrorists could still just as easily take the elevator if they were unable or unwilling to take the stairs, I dutifully complied-they were dark and blurry anyway-thus cementing my place as a defender of democracy-ocracy-cracy.

Looking back on those times, I feel fortunate that I was dressed as my alter ego, average white guy, or else the my experience could have been, in the name of freedom, drastically different.

Despite my lack of new T photos, as a protector of all things American, I feel it’s my civic duty to post a picture from the archive. She’s proud; and what woman wouldn’t be to date a defender of democracy-ocracy-cracy.